Regal Cinemas will now search moviegoers’ bags at all locations 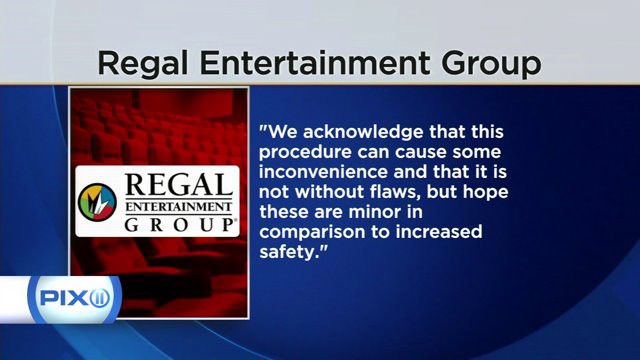 NEW YORK — Moviegoers might want to be more cautious of what they bring in their bags to theaters now that Regal Entertainment Group, the largest movie theater chain in the U.S., is implementing bag searches at all locations.

"To ensure the safety of our guests and employees, backpacks and bags of any kind are subject to inspection prior to admission," Regal stated on its website.

Regal owns over 570 theaters nationwide, with at least 10 locations in the New York City area. Customers visiting any of those movie houses would be prompted to open their bags.

It's unclear when the new requirement began but it does come in the wake of three major movie theater shootings and attacks in three years.

In 2012, James Holmes entered a movie theater in Aurora, Colo., and began shooting people during a screening of "The Dark Night Rises." Holmes was convicted of first-degree murder in late July for killing 12 people and sentenced to life in prison.

As Holmes' sentencing was playing out in court, a gunman opened fire in a theater in Lafayette, La., killing two people, wounding nine others and taking his own life to end the attack.

Two weeks after that, another man allegedly entered a Tennessee theater with a hatchet, pellet gun, and pepper spray and began attacking moviegoers.

The company acknowledged the searches may be an inconvenience but hopes customers understand the change as a necessary move to increase security. Some, though, view this as a violation of their privacy.  Danielle Valenzuela told KPHO she refused to let the movie theater search her purse.

Valenzuela said she walked into the theater anyway and wasn't stopped.

Other patrons told KPHO they would let security search their bags to increase safety.

PIX11 News has reached out to Regal to ask for further details about the policy, including if snacks would be confiscated if found in patrons' bags. Outside food and drink are not allowed in movie theaters, but many moviegoers still bring them in to cut costs on snacks.