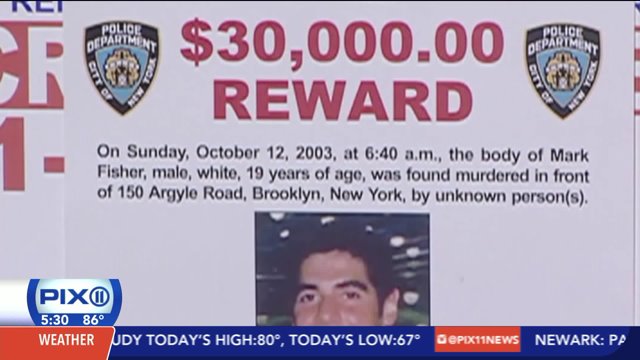 PROSPECT PARK SOUTH—  The murder of Fairfield University football star Mark Fisher has been one of the most talked about criminal cases in recent New York history.

Now, however, thanks in part to an unorthodox investigation by the mother of one of the men convicted of killing Fisher, that man's conviction will be reconsidered by a judge.

"You think this happened to [just] my family?" asked Doreen Giuliano, mother of John Giuca, who was found guilty of the murder ten years ago, but who has a large, international following of people who insist that he's innocent.

"It happens to thousands," she said about what she and attorney Mark Bederow have told a judge was a miscarriage of justice.  "We're talking about an epidemic of wrongful convictions," said Giuliano.

Steps away from the corner of Argyle and Albemarle Roads, Fisher, 19, was found dead in the 6:00 hour of the morning of October 12, 2003. Fisher had been shot multiple times at close range.

He'd been at a party overnight where two people, Antonio Russo, then 17, and Giuca, 20, had been also.  In fact, the party had been at Giuca's house nearby.

"Three blocks away," Giuliano, his mother, pointed out to PIX11 News, regarding where witnesses have said her son was at the time of the shooting.

The case has garnered a lot of attention, some by skeptics, including the author of a tabloid-style book on the murder.  But Giuca's supporters are many, including nearly 2,000 people who've signed a petition to free John Giuca.

Supporters also include the screenwriters and producers for two different films in the works. To one, actor Chris Noth has already committed his support.

In the other, as Giuliano pointed out to PIX11 News, early production arrangements are underway, and "Nicole Kidman is apparently going to play me."

The latest development is that this week, a judge re-examined evidence in the case, and found enough reason to question Giuca's conviction, that he determined that the case will be thoroughly reheard.

Among the reasons why, as an article in Vanity Fair pointed out six years ago, Giuca's mother went undercover, and while posing as a potential romantic interest, got a juror in her son's case to confess to misconduct.

"He didn't know John, but knew his friends," she told PIX11 News.  "He knew what they'd done, he should have disclosed that.  He thought John was Jewish, and admitted he hates Jewish people."

She recorded the former juror's statements and presented them to a judge, who denied a rehearing.  That situation changed, however, this month, when Giuca's attorney, Bederow, was able to convince a judge that prosecutors in his client's case may have improperly carried it out, by having a false witness testify against Giuca.

"Ten years later," Giuliano said, "he was riddled with guilt, and he confessed that he lied."

In the rehearing, the prosecutor, Anna-Sigga Nicolazzi, will be expected to defend her prosecutorial methods, including having to argue that she did not withhold key evidence from Giuca's defense.

For its part, the Brooklyn District Attorney's Office issued a statement that said, in part,  "We are standing by the conviction and we are confident that after a fair and thorough proceeding it will be upheld.”

The rehearing is scheduled for November 16th in Brooklyn Supreme Court.