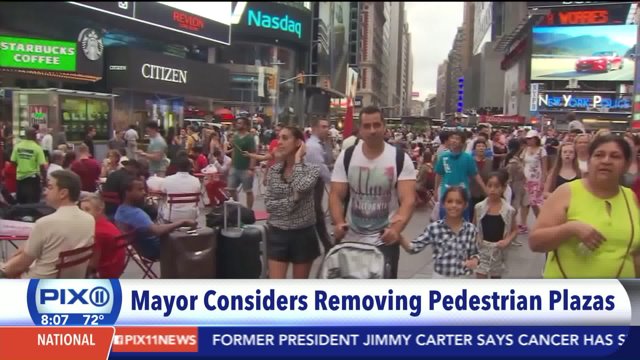 NEW YORK – In their effort to crackdown on topless women and costumed characters in Times Square, a newly created task force is considering the elimination of pedestrian plazas where those performers gather alongside countless tourists roaming the busy Manhattan attraction.

The ranks of nearly nude women at the major tourist attraction have been growing. Many of the women wear only body paint and a thong. They charge a few dollars to pose for photos with tourists.

De Blasio said Thursday that Police Commissioner William Bratton and city lawmakers will study the legal issues associated with regulation and report back their findings by Oct. 1.

One idea under consideration is to eliminate the pedestrian plaza – created under Mayor Michael Bloomberg – where the topless women gather. The costumed Elmos and other characters gather there as well.

Pedestrian advocates said the proposal is drastic and threatens to take away plazas that create a safer situation for tourists on foot.

The Times Square Advertising Coalition derided the suggestion of axing the plazas.

“After six years and $40 million spent by the City constructing the plazas, it would be a terrible mistake to eliminate them as the number one complaint from visitors before their construction was the lack of pedestrian space," the group said in a statement.

"It is imperative that a solution is reached that addresses the harmful and negative activities that currently exist in the area. We stand ready to work with the Mayor’s new task force to find a solution so that tourists and New Yorkers alike can again fully enjoy the bright lights and excitement of Times Square.”