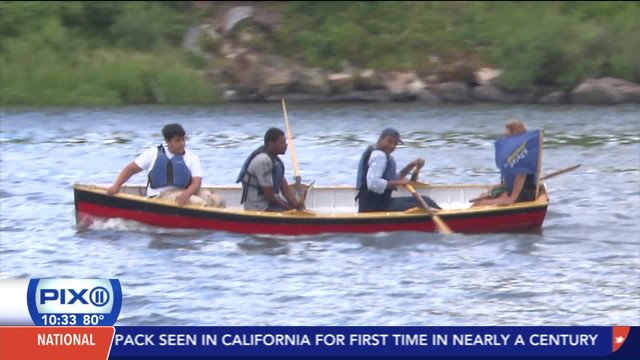 You might imagine, sailing and boat building are *not* typically hot topics of discussion in the Hunt’s Point section of the South Bronx.

But here we are, watching a group of high school students from the poorest zip code east of the Mississippi River…launching a boat they built with their bare hands.

From the forest, to the shop, to the Bronx River - students at Rocking the Boat do it all.

The name of this bustling non-profit organization - Rocking the Boat.

“When you grow up in the hood, it’s not the same way. For example, you could just wake up, be outside, talk with friends. But when you’re at rocking the boat, you get to learn,” said RTB boat builder Kemdry Blanco.

When asked if the project changed him as a person, he quickly responded, “actually it did.”

When we first introduced you to Rocking the Boat, or RTB -Roberto Martinez and his colleagues were in the beginning stages of crafting the boat named “Little Julianna”.

All they had to go on - was an old photograph of the original…a design from the early 1800’s.

Last November, we were so delighted to bring you this story.

Because - in a neighborhood still trying to shake a nasty reputation for crime, drug abuse, and prostitution…it was refreshing to be able to report on one of the *good* things coming out of the South Bronx.

“Those experiences are life-changing for them. So for someone like Robert, and for so many of the other apprentices, it was an opportunity for them to break out of whatever narrow place they were from, and really see the world and understand the possibilities of what they could do in it,” said Green.

Nine months after we met them, these kids indeed built their boat…and it turns out - the boat, in a sense - helped build these kids.

Remember Roberto Martinez from our first story - the shy kid from “Up On The Hill” who showed us the mural of his late father, painted on a bodega wall?

He’s now a lot taller and after helping to build Little Julianna - a lot more well-rounded and ready to set sail toward what looks like a bright future.