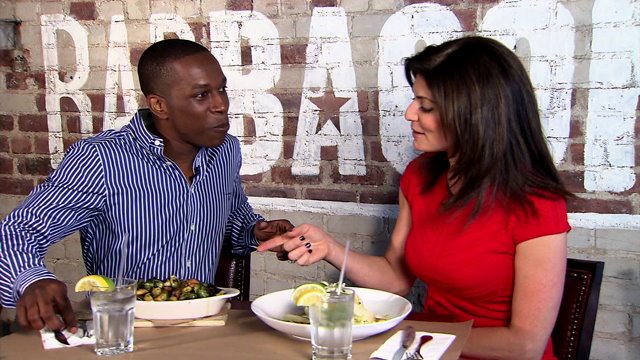 In this week`s Backstage on Broadway, PIX11`s Tamsen Fadal sits down with Leslie Odom Jr. to talk new musical "Hamilton."

“We come for the Brussels sprouts and bacon,” Leslie Odom Jr. laughed as he took a bite.

I caught up with the actor Leslie Odom Jr. at BarBacon in Hell's Kitchen just before his show.

This seasoned Broadway star is turning heads in the modern musical Hamilton.

“I play Aaron Burr who was one of our country’s first vice presidents," Odom Jr. explained. "He infamously shot Alexander Hamilton in a duel."

The show takes you on a journey through the life of America's first Treasury Secretary, Alexander Hamilton, and his relationship with Aaron Burr.

Told through the music styles of rap, hip hop, and jazz, Hamilton is breaking the mold.

"Hamilton reminds the audience of the importance of live performance," he said.

It's also changing the face of Broadway with one of the most diverse casts in recent history.

“Images matter, those images give you the courage to dream,” Odom Jr. said.

Even grabbing the attention of President Obama who shared the experience with his daughters.

“[He came back at intermission," he remembered. "It was a moment none of us will ever forget.”

Three days later it happened all over again.

“At [President Obama's] weekly meeting with Joe Biden he said you've got to go see this," Odom Jr. smiled. "I’ll give you the day off just go, so Joe Biden came to see it.”

So what does this actor value outside the theater?

“It’s really important to me that I spend time with my wife, and that I make time for my friends and family,” he said.

In fact, he credits his parents for his success by encouraging him to use his imagination.

“People would ask what I wanted to be and I said I wanted to be a lawyer, a doctor, a fireman, a policeman, a salesman, a singer, a writer, a dancer, he laughed. "I thought you could do all of those things, and that’s kind of what I get to do now.”

He made his Broadway debut in the era-defining musical Rent 17 years ago.

"Rent is what brought be to the theater. I kind of didn’t know what musical theater was, what Broadway was, before that show," he remembered. "So I found myself at 17 years old standing on that Broadway stage at the center of my wildest dream.”

Now Leslie Odom Jr. is part of a new dream and inspiring a different generation.

Hamilton is currently playing at the Richard Rodgers Theatre.