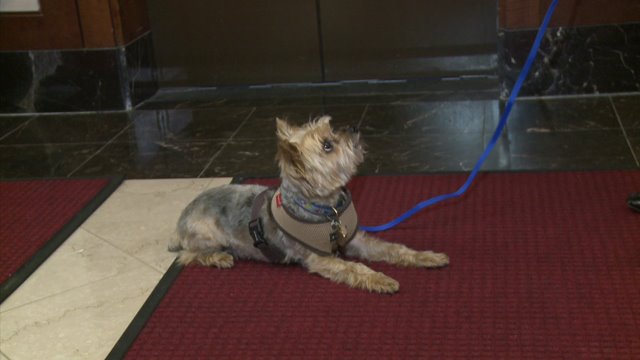 NEW YORK — Chowsie, an 8-year-old Yorkie, was not exactly looking to earn a treat as he so diligently behaved in front of PIX11 cameras Tuesday.

Instead he had his eyes on something more prestigious.

Chowsie, who was accompanied by his owner Liz Donovan, was testing to be an Urban Canine Good Citizen – a new designation from the American Kennel Club that recognizes proper city-dog deportment.

From listening to commands on a busy Midtown street to maintaining composure when passing abandoned food, the urban exam puts a dog’s skills to the test in a real-world setting.

“These are all skills if your dog has them, they’re going to be a good citizen in the urban environment,” Gina DiNardo, Vice President of the American Kennel Club, told PIX11 News. “it’s a great way to practice responsible dog ownership.“

“It’s completely unpredictable,” explained certified professional dog trainer Sarah Westcott about the outcome of the exam. “You just have to hope that your dog has generalized their training enough to be able to go ‘oh that’s just a giant truck backfiring, I’m ok.’”

The benefits of earning the CGCU title goes well beyond bragging rights.

“There are certain communities across the country that recognize CGC as a valid test and its helpful then for you to get into certain apartment complexes or coops,” DiNardo said. “It’s a really good test for people who want to do therapy work.

The urban exam, which is just a few months old, comes at a time when dogs are getting more liberties in public places.

The New York State assembly is currently reviewing a bill that will allow restaurants to welcome dogs on their outdoor patios.

While it may seem like a small step for non-dog owners, its truly one huge step for man’s best friend.