‘I am Batman,’ Donald Trump tells boy on helicopter ride 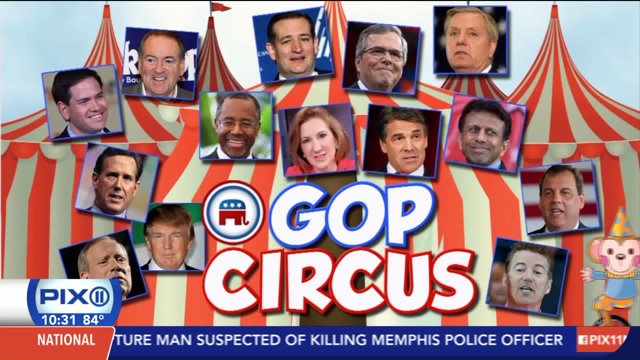 While Donald Trump currently leads the polls, other GOP hopefuls are doing whatever they can to make sure they can pull ahead.

DES MOINES, Iowa -- A helicopter landed here just after noon on Saturday, causing a short but violent windstorm. Large trees shivered; small ones bent nearly sideways. Dust swirled up from the parking lot, stinging the eyes of the onlookers. The pilot cut the engines. A man got out of the helicopter. He wore white shoes and white khakis with sharp creases and a red baseball cap that said MAKE AMERICA GREAT AGAIN. He strolled across the searing asphalt and stood at the edge of a field, where nearly 100 people waited to find out what he would do or say next.

"We have quite a few children gonna take rides today," said Donald Trump, billionaire, celebrity, entertainer and Republican candidate for president. "Where are the children? Get them over here."

Half a mile northwest, beyond the railroad tracks and the Laurel Hill Cemetery, the Iowa State Fair proceeded as usual.

You could see a cow made of butter or a 711-pound Giant Atlantic Pumpkin. You could eat a bacon-wrapped rib on a stick and drink a 32-ounce Miller Lite while watching a one-man band play and sing "Mustang Sally." You could strap into a ride called Slingshot, whose giant elastic bands would fling you toward the pale blue sky.

But here in the parking lot was something else altogether: a chance to ride in a customized Sikorsky S-76B helicopter with one of the richest and most famous men in America.

Taking their cue, nearly 50 children stood behind him on the asphalt as he answered questions about what he would do if elected president.

"Under what circumstances would you use a nuclear weapon?" a reporter asked.

"I don't even wanna talk about that question. It's a very serious question," he said before expounding on the importance of a strong national defense.

After he went through his standard rhetoric about billionaires corrupting the political system, someone asked whether he thought anyone else was qualified to be president.

"Nobody else will do the job that I will do," he said. "I will bring back jobs, I will strengthen our military, I'll take care of our vets, I'll get rid of Obamacare, which is, by the way, a catastrophe."

Here the crowd interrupted him with applause; at least 10 children spontaneously joined in.

Trump was on a roll now, casting aspersions on the local newspaper, describing the wall he would build along the Mexican border and assuring the media that actual voters trusted him so much they did not need to see the details of his immigration policy.

The more entertaining he makes the race, the better he seems to do in the polls.

His campaign has not been derailed by his inflammatory comments about Mexican immigrants, or his verbal grenades at John McCain, or his denigration of Rosie O'Donnell, or the tawdry complaints about Megyn Kelly that caused his banishment from the recent RedState gathering or conservatives.

He leads all competitors by at least eight percentage points among likely Iowa Republican voters, according to a recent CNN/ORC poll.

"So I guess I haven't made any mistakes," he said as the children shifted their weight and tried to be patient. "I'm sure I will, at some point, but so far, you would have to say, it hasn't worked out badly, right?"

It's hard to say what the polls mean.

The Iowa caucus is more than five months away, and most Republican voters remain undecided.

"To tell you the truth, I hadn't even thought about it," said Rick Robbins, 46, a concrete worker selling cold water to fair-goers in his front yard on Saturday afternoon. "It's a little early in the game."

But this much is certain: Whether or not Americans intend to vote for Trump, many of them would like to catch a glimpse.

Heather Kintzle, a 40-year-old administrative assistant from Cedar Rapids, went to the fair on Saturday to hear an impassioned talk about economic inequality from Sen. Bernie Sanders, the Democratic candidate who is calling for political revolution. Kintzle loved what she heard from Sanders, but she still wanted to see Trump, "to see what all the circus was about."

Just before Sanders took the State Fair Soapbox, a young woman wandered down Grand Avenue past his army of young revolutionaries. She was looking down, asking her smartphone a question:

"Where is Donald Trump right now?"

The Bowman family had driven from the western suburbs to see Trump and his helicopter. Neither David nor Sarah Bowman had resolved to vote for Trump, at least not yet, but they had four little boys, and this chance was too good to miss.

Into the helicopter went William, 9; Sean, 6; Brendan, 5; and Henry, who just turned 3. Their mother went with them. Henry got scared just before takeoff and left the aircraft to be with his father. The other boys remained. William brought a GoPro camera to capture the experience; a clip later wound up on Facebook.

"Mr. Trump," he said, aiming the camera at his benefactor.

"Yes," Trump said, pulling on the lapels of his jacket.

"Are you Batman?" the boy asked.

The helicopter roared to life, causing another windstorm, hurling more dust at the people outside. William looked out the window, marveling at the power of the machine.

Here was Trump's vantage point: a comfortable seat in the eye of the storm, a place to watch the rotor wash without messing up your hair. To William, this was the best moment of the whole ride. It felt just like a video game.