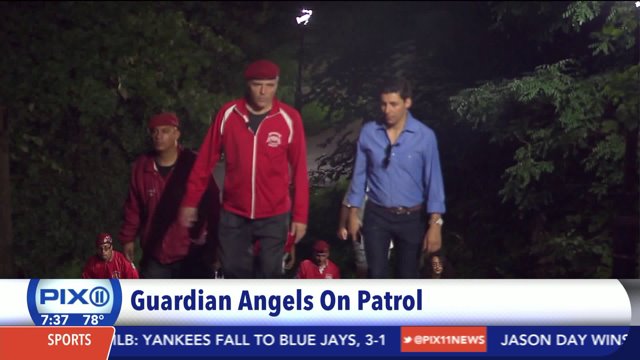 MANHATTAN — For the first time in two decades, the Guardian Angels are on patrol again in Central Park, where crime has jumped nearly 28 percent year over year.

Known for their iconic red berets, the group played a significant role in the 1980s when they patrolled the New York City subways as a vigilante watch group. It is their belief that the patrols are again needed because crime is on the rise.

Last week, a man was choked and mugged in the park. Police have since released a sketch of the attacker.

Statistics released by the NYPD show robbery is up 120 percent from the same time last year with two reports of rape compared to last year.

The department told PIX11 News overall crime is down 80 percent in the park, but Guardian Angel Sliwa said that is "mathematic trickery."

"They need to get out of their cars, get into the paths, and go where there are no lights," he said of city police officers.

The angels are a watch group made of members who are not armed. They were big in the 1980s, patrolling the subway system.  Twenty years later, they are patrolling the park when the sun goes down because they believe if you lose the park, you lose the city.

PIX11 News tagged along during the late-night hours when the inner pathways of the park are pitch black.

"There are no lights, no police, no cameras, no nothing," Sliwa said. " But there is a foot path."

We encountered a group smoking marijuana deep inside the park on 110th and Central Park West but, Sliwa said, that's not what they are looking for.

"If a crime is in progress, we detain a suspect and detain them until police arrive," Sliwa said.

We did see police on patrol down on the lit streets of the park, but Sliwa says it is up in the darkness where they are needed  However, PIX11 News didn't encounter any New Yorkers while we were on patrol.

Crime is up as a whole in the city -- homicides are up by 17 from last year, shootings up by 2 percent in the same time period. Those stats led us to wonder why the park and not the streets. Sliwa said officers are easily noticed on patrols and he wants his group to be where the NYPD are not.

The men and women of the Guardian Angels are trained on how to successfully detain a culprit and just last month they conducted a citizen arrest when a Brooklyn man was robbed of his cellphone.

Back on the street, we wanted to know if New Yorker's welcomed the Angels back on their streets and the reaction was mixed.

"I think it's wonderful,'' said one woman. "I walk my dog at night and I'm definitely concerned."

But some think it won't make a difference, that the criminals won't be afraid.

"I wonder how much is for them, this resurgence, whether it's for publicity or the actual cause," they said.