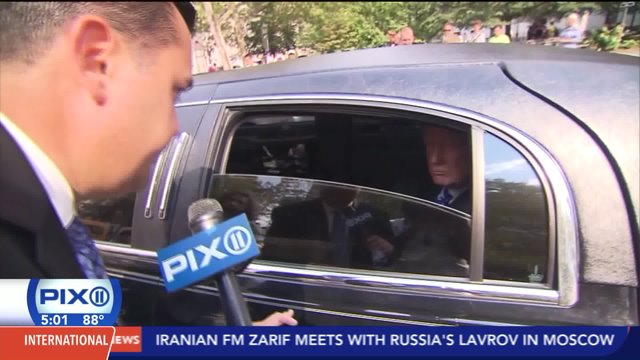 LOWER MANHATTAN — The lovely lady standing tall in the shadows of Old Glory at 60 Center Street, has seen it all through the years.

However on Monday, a new chapter was written. One observer describing the scene as "This is the theatre of the absurd."

All because New Yorkers were showing up for jury duty.  Which according to Jefferson Siegel, the courts photographer for the Daily News can be characterized as, "Very sedate, very quiet and calm and most people say rather boring because they spend a lot of time waiting and doing nothing."

However, Siegel then quickly added, "I don't think those jurors, potential jurors today, will be experiencing that."

The reason? Well because of who emerged shortly after 9:00 a.m., from a limo,  Donald Trump.  The mogul, reality television star, and, coincidentally, the GOP front-runner in the 2016 presidential race reported to the courthouse for jury duty.

It should be noted, that there are thirty steps that rise up to the front doors of Supreme Court.

On his ascent as well as his decent, Trump worked the line of reporters like he was at an awards show.  Prior to leaving for a lunch break PIX11 News asked Trump to take in the scene behind him and provide his perspective? "Amazing world."

Less than two hours later, Trump was back for the afternoon session. It was there that PIX11 News asked Trump point blank, what kind of juror would you be? He quickly responded, "A very fair juror."

The motto on the courthouse is  "The true administration of justice is the firmest pillar of good government."

This said, PIX11 News asked Bill Smith, a civil attorney, if he would want Donald Trump on a jury in a trial?

"It depends, it absolutely depends. It's a great question. Depending on the type of case he may be the perfect juror," Smith said. "For instance, I represented a wealthy landowner or somebody not unlike Trump Towers I probably would want him on my jury, but I would imagine somebody for instance involved in an injury case might not."

Ultimately, Trump emerged a few minutes shy of 4 p.m. He was not selected.

PIX11 News caught up with his limousine in the middle of Centre Street to get what this day meant to him terms of the political race considering that New York is not a battleground state yet he still had all of the attention of the media.

"I just think the system is a great system," Trump said. "Have a good time. Thank you."