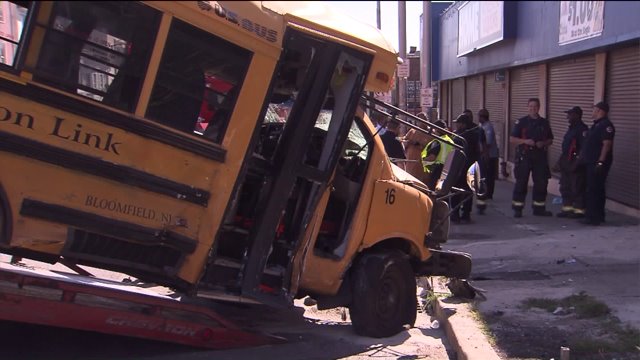 Surveillance video shows the bus smashing into an SUV, before plowing into the liquor store at the intersection of Sanford and Springfield Avenues around 8:15 a.m.

“I ran out, called 911, and started helping kids,” said Marie Shenouda, who witnessed the accident from the deli she works at across the street.

“The kids, some of them were hurt. One kid was screaming for his leg. His leg was hurting. Another kid was bleeding from his mouth. And a few other kids, they were like crying.”

11 children between the ages of 10 and 16 were on their way to the special education school, Mount Carmel Guild Academy in West Orange when the bus crashed. Some had to be extricated.

“There were doors that were wedged shut due to the impact of the crash. So the front doors (were) inoperable. They had to use the emergency exit door on the school bus,” explained John Tierney, Chief of the Irvington Fire Department. “The emergency windows were also removed.”

All the kids, a school bus aide, and the bus driver, along with the driver of the smashed up SUV were taken to University Hospital in Newark and other area medical facilities where they were treated for non-life threatening injuries, from lacerations to broken bones.

While the bus driver, who works for Horizon Link, told authorities her brakes failed as she approached the intersection, the exact cause of the accident remains under investigation.