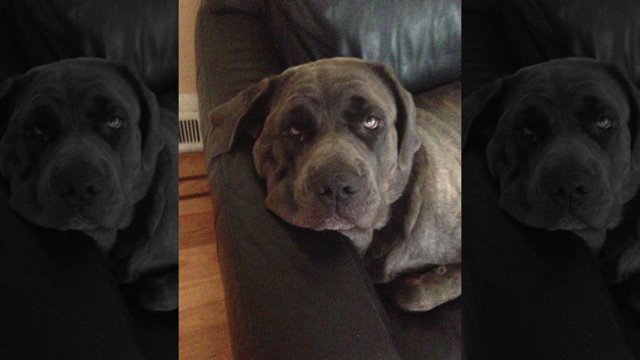 LYNBROOK, N.Y. — When Barbara Doumanis went shopping for a dog, she went to a pet store called Shake-a-Paw in Lynbrook, Long Island.

She was looked for a Cane Corso, also known as an Italian Mastiff. She found a puppy there that she was assured was a purebred Cane Corso.

The salesman told her that Shake-a-Paw’s dogs were hand selected by reputable breeders. Barbara paid $2,000 for the puppy, which she named Thunder.

At about a year old, Thunder’s behavior began to change. He became aggressive, so Barbara and her husband decided to have him neutered.

Still showing signs of aggression, he also at times became lethargic, didn’t eat as much and was vomiting. She took him to the vet where he was diagnosed with a condition called Addisons Disease.

It attacks the adrenal glands above the kidneys, a rare disease for this breed. The disease requires daily, expensive medication.

Barbara contacted Shake-a-Paw. The manager said the dog is no longer under warranty and there was nothing they could do. Barbara says she then did some research on the breeder, whose name was listed on the bill of sale.

She says an internet search found the breeder had been identified as a puppy mill in Iowa which was cited by the USDA for unfit conditions.

Barbara also decided to have Thunder’s DNA tested. She paid for the tests which showed it was not a purebred Cane Corso. It was a mixed breed of Cane Corse, Neopolitan Mastiff, and Rottweiler Cross.

She also did what she should have done before starting to even shop for a dog.

She checked with the Better Business Bureau and found Shake-a-Paw In Lynbrook has an F rating.

In the meantime, Thunder’s behavior continued to deteriorate. He bit four people, including Barbara, her husband and niece.

Barbara decided she had no choice but to have the vet put him down. Thunder was two years old.

The owner did not show up for either of the two hearings and the judge awarded Barbara a judgment of $3,800. That was July 8. The owner has 30 days to pay and still hasn’t forked over any money.

Barbara can now go back to court and get a Marshall to help her collect the judgment.

We went to Shake-a-Paw with Barbara and were told there was no owner or manager to speak with us. I left my number but never get a return call.

Most dog experts agree if you are looking for a purebred, you’re best off going directly to a breeder.

If you don’t care about a purebred, a dog from a shelter is often as good or better than one from a pet store.