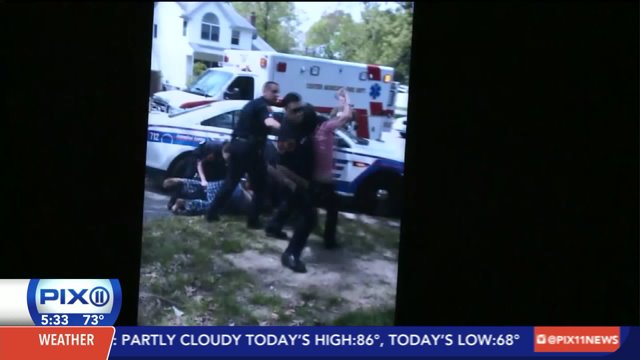 A man says since filming a rough arrest, he`s been the target of police harassment.

CENTER MORICHES, New York - It started with a wild family feud and ended with two brothers in jail and a mother first immobilized by a police stun gun, then left unconscious after being knocked to the ground.

The bystander who captured it all says that over a year later police are now harassing him.

“Now my mom’s knocked out the floor, look at her,” said Thomas Demint while watching the disturbing video he recorded that day.  “I don’t regret taking the video but it did bring me a lot of complications after taking the video.”

It all happened May 22, 2014 in Center Moriches in Suffolk County, Long Island.  Demint says he was on his way to work when he spotted police officers arresting a friend, that friend’s brother and their mom after an altercation.

“I was genuinely shocked,” Demint said.  He documented the frantic scene on his cell and insists he stayed out of the way.

“My client was not aggressive, my client was standing there videotaping,” said Demint’s attorney Ken Mollins.

Suffolk County police responded in a statement saying, “Thomas Demint interfered with officers by shouting obscenities toward police officers and paramedics as well as entering the scene several times after he was told not to.”

After several minutes it seemed the drama was finally over.  “At that point the videotape stopped, my client was walking away, three police officers jumped him on the back, threw him down to the floor and cuffed him, cuffed him and they arrested him and charged with obstruction of justice.”

The 20-year-old says cops on the scene tried to erase the video from his phone but deleted the wrong clips. And since then – Demint says he’s been stopped by police several times.

“When I was pulled over the cop said ‘You will see me again and you can count on that,’ so I’ve been afraid that I would be targeted and pulled over every day and harassed because they knew I have the video on my phone.”

And that’s why today they’re releasing the video – and speaking publicly. Demint and his attorney believe officers don’t want this video seen by the public for one reason

“This is clearly evidence of police brutality,” Mollins said.

Police issued the following statement on the incident:

Suffolk County Police officers responded to a Center Moriches home after a 911 caller reported an adult male was attempting suicide on May 21, 2014 at approximately 11:10 a.m. When police arrived, officers attempted to administer aid to the suicidal man when his family intervened.  While police were attempting to calm down those involved, Thomas Demint interfered with officers by shouting obscenities toward police officers and paramedics as well as entering the scene several times after he was told not to. Mr. Demint’s actions diverted officers’ attention away from the suicidal man and Mr. Demint had to be physically escorted away from the scene. Mr. Demint was placed under arrest for Obstructing Governmental Administration and Resisting Arrest.

The Suffolk County Police Department respects the civil rights of all members of the public. These rights extend to bystanders at police scenes; however, bystanders must not interfere with police operations or create a safety risk to the public. Bystanders may record video as long as they do not enter restricted areas, interfere with police operations, violate any laws or compromise the safety of officers.