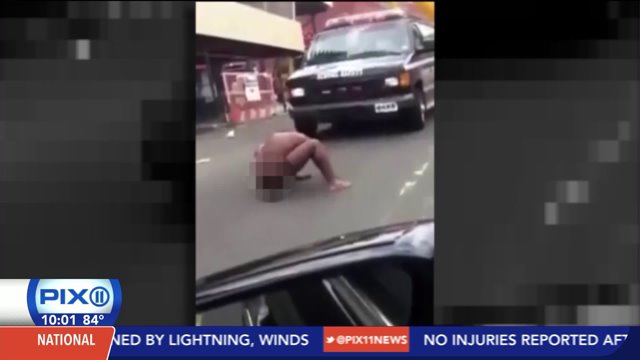 Police Commissioner Bill Bratton has released shocking video as part of the training to stop the spread of synthetic marijuana.

One of the videos, shot from inside an NYPD school safety van in Brooklyn, shows a naked man crouching on all fours in the middle of the street, slamming his arms on the ground and screaming.

“This is the middle of the day,” Chief of Patrol Carlos Gomez said as the video played for reporters at One Police Plaza. “Irrational behavior, the person is naked.”

As PIX11 Investigates has been telling viewers for two weeks now, synthetic marijuana is not really marijuana at all. It’s incense or potpourri that’s been sprayed with chemical cannabinoids to produce a high.

The mixtures used keep changing, an effort to avoid landing the ingredients on the New York State list of banned substances.

That allowed the product to be sold in delis and city officials became alarmed when emergency room visits skyrocketed in April 2014.

People were collapsing on the streets with seizures or acting out violently.

Bratton mentioned a case in the Bronx where Emergency Services cops responded to one call about a violent man suspected of being on K2, one of the brand names for synthetic marijuana.

As the police started using an electric saw to cut open the door and get to him, Bratton said, “He literally grabbed this electric saw with both hands."

Chief Lopez pointed out many users are “impervious to pain.” Many have super-human strength.

In a second video, shot by police from out of state, a naked man is seen punching through a pine fence and then pushing a female police officer.

“Ground Zero” for the initial crisis in New York was Lexington Avenue in East Harlem, where a number of delis and smoke shops have been raided since early July.

Bratton was joined by some of the top brass from the department Tuesday, calling K2 and other products “weaponized marijuana.”