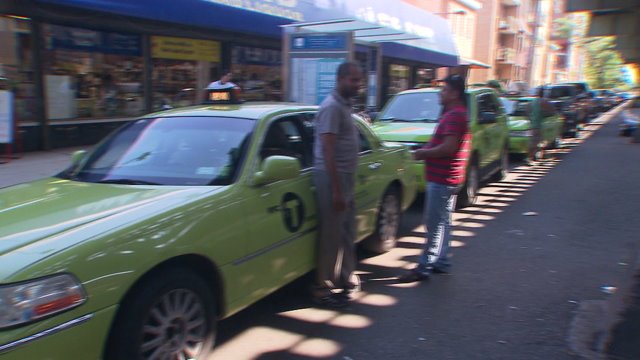 ASTORIA, Queens -- Green taxis, the color of green apples, are a common sight outside of Manhattan. They are allowed to cruise in all the boroughs except midtown Manhattan and below, providing cab service to places where yellow cabs often aren’t available. But in some areas, like Astoria, Queens, the owners of local businesses and the owners of the green taxis are not getting along.

What’s going on is a turf battle for parking spaces that are on the public streets. The taxis want the spaces so they can get the customers coming off the subway. But the businesses say they need these spaces for their customers.

“This has become a free taxi stand”, says Alfred Hansen, the manager of Grand Wine and Liquors. The green cabs line up outside his store next to the 30th street N and Q subway stop and park up and down the block, where it’s one hour meter parking.  Hansen says the green taxis often don’t pay the meter and take up the spaces  customers  need to park and shop.

I spoke with a number of green taxi owners who say they usually  pay the meter, but when I checked, very few had any receipts on their dashboards.  The drivers insist they do pay and say they have a right to these public spaces, as any other vehicles has.

But some of the local businesses say the green cabs are monopolizing the spaces. When one pulls away with a fare, another is waiting to take its place. The manager of the local supermarket says “ there’s no parking. It’s very congested  here. It’s not fair to the customers who want to shop.

I asked some of the green taxi drivers why they don’t cruise the streets instead of staying parked on the curb for sometimes an hour or more at a time. They say they do cruise, but the business is best around the subway stations where they line up waiting for fares.

The business owners say perhaps the city should give the green taxis a designated stand for one or two spots, but not allow them to take up as many spots as they’re now doing.  The Taxi and Limousine Commission says it is going to send its enforcement division to take a look.