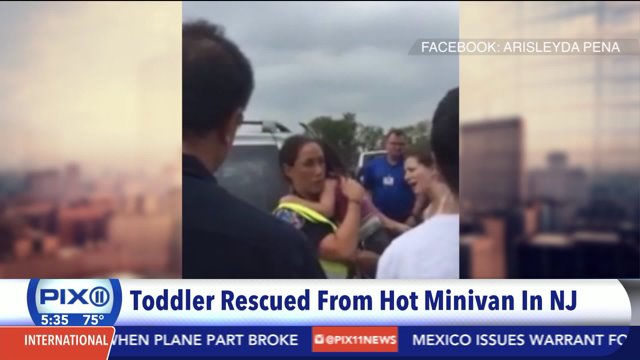 HACKENSACK, N.J. – A two-year-old girl is alive thanks to a quick thinking manager at a Hackensack Costco, who alerted a Bergen County Sheriff's police officer that she was trapped inside a hot van.

Desperate moments were caught on cellphone and then posted to Facebook and viewed more than two million times since Thursday.

The Facebook video shows a 2-year-old girl sitting inside a parked minivan at a Costco parking lot, located at 80 South River St., waiting for her mother to finish grocery shopping.

She could be heard wailing from inside the van on this hot, humid day. The scared little girl was "sweating profusely" and crying in the car seat.

Officers quickly rushed to her aid and smashed the glass to open the minivan door.

The video shows them picking up and hugging the crying girl after the fact. And when they took her out, the child was drenched in sweat.

The officers started running the minivan's license plate to find the parents. But less than a minute later, the mother, Chaeyoung Lim-Kim, with another child on a shopping cart, walked right up with a full cart of groceries.

She responded with a "sorry" when one of the officers asked if the kid was hers.

The officer quickly reprimanded her, saying "No sorry. She could have died!"

Witnesses at the scene say how it was in the car– like an oven.

They can't forget those little girl's eyes looking at them as they broke that window  to get in.

And you have to wonder if it's the first time she has done this, but this time she got caught.

The mother was arrested and charged with child endangerment and released on her own recognizance.

The two-year-old girl sweating in this unbearable heat was sent to the hospital and is now in the custody of her father.