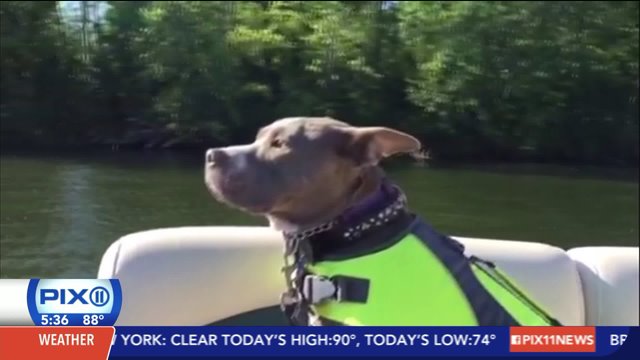 "Jackie" the pit bull was found last year wandering the Jackie Robinson Parkway. She`s since been adopted and renamed "Lilly."

NEW YORK — It was in late July 2014 when a scared and disoriented pit bull wandered on the Jackie Robinson Expressway during the morning rush hour.

AIR11 was over the scene as the frightened pup shuffled back and fourth through passing cars.

The dog, who was later named Jackie for the obvious reasons, was eventually rescued and taken in by Animal Care Centers of NYC and we featured her story right here on PIX11.

“She is a little scared and a little nervous but once she warms up to you she definitely wants a little cuddle,” an ACC worker told PIX11, describing the then-sheltered pit.

What Jackie ended up getting was a cuddle and then some.

A year later, the once-frail pit is happy and healthy thanks to Brooklyn couple Kathleen Vogelsang and Daniel Orr.

“We saw her both online thanks to you guys and on Facebook from other sources and we just decided let’s go see her,” Orr said.

Vogelsang decided almost immediately that she was going to take in Jackie.

With the help from Pibbles and More Animal Rescue, the couple was able to take in Jackie who became Lily.

“We wanted to change it,” she said. “It was cute but we wanted her to get a little bit of a fresh start.”

The new and improved Lily is now training to be a therapy dog with the Good Dog Foundation that helps those with disabilities or ailments heal.

“Its providing relief for people going through certain stresses and [we wanted] to find something for her to do and be productive and help us give back a little bit as well,” Vogelsang said.

And for anyone on the fence about taking in a shelter animal, the couple offers up this message

“There are so many dogs that they just need you to take a chance on them and once you give them stability they’ll be confident and flourish like Lily has.”

Pit bulls just like Lily, currently make up half of the breeds in New York City animal shelters. Their one common thread is they need a home.

You can be part of a story like Lily's. Visit the ACCNYC website to find out how to adopt.