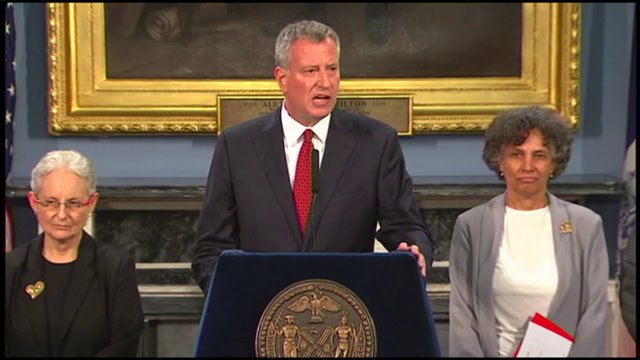 SOUTH BRONX — Amid an "unusual" outbreak of Legionnaire's disease in the South Bronx, health officials have identified two sources of the illness and are testing at least 10 more sites to pinpoint where the infection is coming from.

Cooling towers at Lincoln Hospital and Concourse Plaza have been fingered as sources of Legionnaire's and are being decontaminated, Mayor Bill de Blasio said in a Thursday afternoon news conference. That process includes treating the water with a disinfectant and continuously flushing the system with fresh, clean water.

Health officials on Thursday said there have been 46 reported cases of the illness in the South Bronx since July 10. Nine patients who were hospitalized have been released and two patients have died, officials said. They first announced the deaths on Wednesday.

Most of the cases have been reported from the South Bronx neighborhoods of High Bridge-Morrisania and Hunts Points-Mott Haven, the city said.

Legionnaire's disease is a severe form of pneumonia caused by the bacteria Legionella, according to the Mayo Clinic. It's not spread person to person, but rather by breathing in particles of water that contain the bacteria.

No patients or staff at the hospital have come down with Legionnaire's, health commissioner Dr. Mary Bassett said.

Residents in the area can continue drinking their tap water and showering as they normally would, she added, because it does not appear that a plumbing system is the source of the outbreak.

Investigators are flying above the city and using aero-photography to identify buildings that have cooling towers so that they can test those towers for the bacteria, Bassett said.

Those at highest risk of Legionnaire's include middle-aged or elderly people, cigarette smokers, those with chronic lung disease or weakened immune systems.

Antibiotics are used to treat the illness and most patients recover within a few days, health officials said.