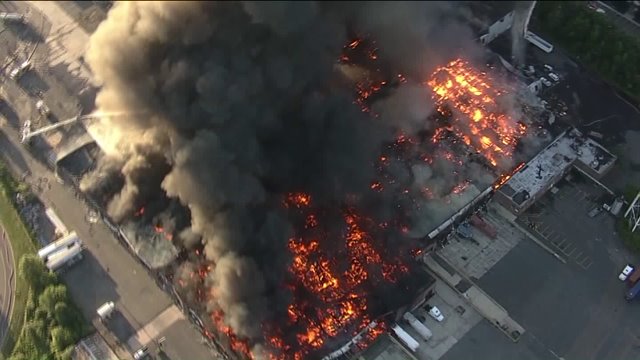 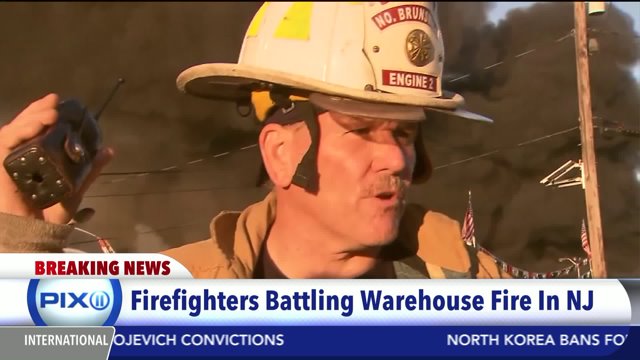 NORTH BRUNSWICK TOWNSHIP, N.J. — Firefighters have gained the upper hand on flames ripping through a warehouse complex in New Jersey that forced residents from their homes and sparked concerns about air quality in the area as toxin-containing plastics, tires and linoleum floors burned.

The fire began about 1:30 a.m. Wednesday at 1600 Livingston Ave., a complex that houses eight businesses including DCH Collision Center and a plastic chemical company. A former employee told PIX11 News piles of tires and vehicle parts are among the items inside that complex.

Huge plumes of dark smoke billowed from the site and could be seen from Midtown Manhattan and miles away in other parts of New Jersey, residents said.

By 9 a.m., much of the complex was spewing white instead of black smoke, a sign that the flames beneath were starting to dissipate. As of noon, aerial footage showed the complex was still smoldering but there was significantly less smoke.

Chief Don Salzman with the North Brunswick Fire Department said the "entire warehouse" was compromised and will be allowed to burn to the ground.

The building is made of highly flammable wood and linoleum flooring, contents that created conditions ideal for a fast-moving blaze, Salzman said. Plastic burning inside the warehouse does have "toxins" in it, he said.

Residents are urged to stay inside, keep their doors and windows closed, and keep their air conditioners off if possible, North Brunswick Mayor Francis Womack said in an 8:45 a.m. news conference.

An air quality alert has been issued for the Maple Meade area, officials said.

At least six nearby residential buildings have been evacuated and several used cars caught fire as wind blew smoke and embers off the main blaze, Salzman said. There was no estimated time given about when those residents will be allowed to return to their homes.

Officials are waiting for Hazmat teams monitoring air and water samples to make sure those samples are clear of potentially dangerous chemicals before letting residents back to their neighborhoods, Salzman said.

No civilian injuries have been reported. A firefighter hurt their hand, marking the single injury from the fire so far, Salzman said.

Crews likely will have to remain at the site throughout the day and possibly into the night, putting increased demand on water in the area.

Residents are asked to conserve water so those resources can be used to fight the blaze. They may also notice decreased water pressure, the mayor said.

Already burning for hours when the Wednesday morning commute began, the fire affected the drive to work for many.

Route 26 was closed in both directions at Route 1 due to the blaze. The Route 1 northbound ramp to Livingston Avenue was also closed.

Amtrak lines run near the complex but train service is not expected to be affected by the blaze because "the wind is in our favor" and blowing the dense smoke away from the rails, Salzman said.

More than 150 firefighters from multiple counties have responded to the five-alarm blaze. A cause of the fire has not yet been determined. An investigation is underway.