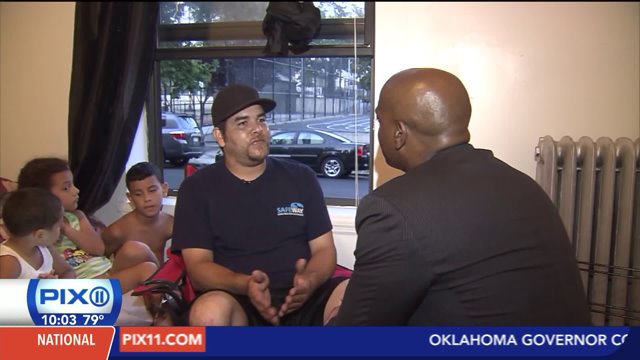 PARKCHESTER, Bronx-- From his first floor apartment’s bedroom window, Jesus “G” Rivera, has a front row seat to a deadly crime scene that hits home for any parent.

Just outside, in front of the Taylor Playground and the adjacent elementary school, NYPD Bronx detectives investigated the death of a young man, identified by relatives as 21-year old Allen McQueen.

McQueen was walking down the street in this Parkchester neighborhood - in broad daylight Tuesday afternoon, when someone approached him and shot him in the head.

At the time, McQueen was holding his one-year old daughter.

“My instinct was to run downstairs to grab the baby. So that’s what I did. Nobody knew there was a baby underneath him. He had a bullet wound in the back of his head, and one coming out the front.so it was pretty intense,” said eyewitness Areille Corkley.

We spoke with the baby’s grandmother, Jennifer - who did not want her face shown on camera.

“Regardless of somebody’s background, you don’t’ gun down a man who’s with his child. My concern is the children. Children first,” said the baby’s grandmother.

It remains unknown if an argument or dispute preceded the shooting.

But for Jennifer, the baby’s grandmother and for G, father of six children who lives right across the street from the shooting - none of that matters.

What does, they say is that we should be focusing our attention on the fact that whoever pulled the trigger, could have taken the life of a child.

“That fact that it happened by a park, any innocent kid could have been shot. And I can’t believe that someone would do that in broad daylight. You’re jeopardizing the child’s life as well,” said Jennifer.

“It’s more common to me, than to most people I known. Like my wife and her family. They didn’t go outside at all today.” He continued, “you just get used to it. You get to used to seeing the crime. This is not the first time I’ve seen somebody die. I don’t’ know how to say it. It’s just more common for us to see.”