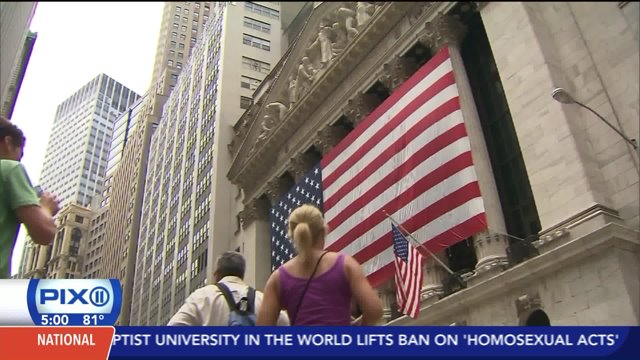 Officials are blaming computer glitches after United Airlines was forced to ground planes and trading came to a halt on the floor of the New York Stock Exchange.

NEW YORK (AP) — Trading will resume on the New York Stock Exchange at 3:10 p.m. Eastern time after an outage of more than three hours caused by technical problems.

There was no interruption at the dozens of other U.S. stock exchanges Wednesday, including the Nasdaq, so investors were still able to buy and sell stocks easily.

The NYSE didn't say what the problem was but described it as internal issue and not the result of a breach of its systems.

It was already a tough day in markets when the unexpected hit.

The New York Stock Exchange stopped trading late Wednesday morning because of technical trouble, though NYSE-listed shares continued to trade on other exchanges.

NYSE said on its official Twitter feed that it was an internal problem and not related to a breach of its systems. As of 2:51 p.m. Eastern time, nearly three and half hours after the outage started, trading had not yet resumed on the NYSE.

The Dow Jones industrial average and other indexes continued to move as orders to buy and sell stocks were sent to the Nasdaq and other platforms around the country.

The outage came as major indexes were heading lower. Concerns about China's plunging stock market and a logjam in talks between Greece and its creditors weighed on the mood.

The trading halt at the NYSE came on the same day United Continental had to temporarily ground its flights across the country because of computer problems. There was no indication the outages were related.

KEEPING CALM: Tom Caldwell, who runs an investment firm with stakes in several exchanges, says there are some 60 exchanges and trading venues that can take orders when one goes down, so investors shouldn't get rattled.

"It's disruptive, but not wildly disruptive," said Caldwell, chairman of Caldwell Securities. "You have so many competing exchanges."

Earnest said Obama was briefed on the United Airlines glitch that temporarily grounded its flights.

"There is no indication at this point either that there is malicious activity involved or that it was related to any of the other high profile technology issues that have cropped up today."

EXPERT TAKE: James Angel, associate professor of finance at Georgetown University's McDonough School of Business, said the exchange shutdown showed both the fragility and the resilience of the modern technological society.

"What surprises me is how infrequently these major outages occur," he said. "From an investors' perspective, if you hadn't heard about the outage, you probably wouldn't have noticed."

Angel sat on the board of exchange company Direct Edge before it was acquired by a larger rival last year.

WATCHING AND WAITING: Thomas Farley, president of the NSYE Group, which includes the New York Stock Exchange, told CNBC in an interview that the exchange was aiming to reopen before the close, which happens at 4 p.m. Eastern time.

SEC: Mary Jo White, the chair of the Securities and Exchange Commission, said: "We are in contact with NYSE and are closely monitoring the situation and trading in NYSE-listed stocks."

OTHER SNAFUS: U.S. markets have experienced other technical problems in the past as more trading is handled by computers.

In May 2010, the Dow Jones industrial average plunged hundreds of points in minutes in an incident that later became known as the "flash crash." In March 2012, BATS Global Markets, a Kansas company that offers stock trading services, canceled its own IPO after several technical snafus.

Two months later, a highly anticipated IPO of Facebook on the Nasdaq exchange was marred by a series of technical problems, rattling investors unsure if their orders to trade went through.

MARKET RESPONSE: Stock in the company that owns the New York Stock Exchange continued to trade. The IntercontinentalExchange Group, which owns NYSE Euronext, fell $3.58, or 1.7 percent, to $223.65. That compares with a drop of 1.1 percent for Standard and Poor's 500 index. Nasdaq OMX Group, which runs the rival Nasdaq exchange, fell 80 cents, or 1.6 percent, to $48.04.

ANOTHER SNAFU: United Airlines temporarily grounded all its flights in the U.S. because of a problem with its computer system. It's the second time in two months that the Chicago carrier has been hit by technical troubles. Shares in United Continental Holdings, the parent company, fell $1.32, or 2.4 percent, to $53.

CHINA: The Shanghai Composite sank 6 percent Wednesday, despite new attempts by China's government to stop the selling. Hong Kong's Hang Seng, a victim of the turmoil in mainland Chinese markets, also lost 6 percent. Beijing ordered state-owned companies to buy shares and promised more credit to finance trading. The Shanghai index has lost a third of its value in the last month, leaving it with gains of 70 percent over the past year.

GLOBAL CONCERNS: "I think it's a combination of fears," said Hank Smith, chief investment officer at Haverford Trust. "The fear that there won't be a bailout for Greece combined with what's going on in China."

GREECE: Hopes for a resolution to Greece's crisis rose after the country applied for a new three-year loan and said it would have a new proposal for creditors in coming days. The deeply indebted country needs a financial lifeline from its European lenders before its banks collapse, an event that could push Greece out of the currency union.

REPORT CARDS DUE: The unofficial start to the second-quarter earnings season starts Wednesday when Alcoa turns in its results after the closing bell. Analysts forecast that companies in the S&P 500 will report that their overall earnings dropped 4 percent in the quarter, according to S&P Capital IQ, as a rising dollar and falling oil prices pinched profits.