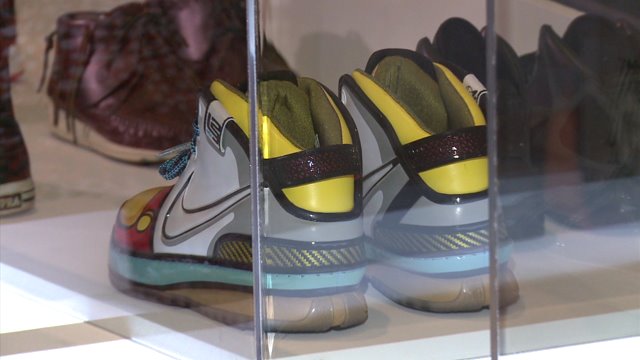 The Brooklyn Museum is hosting a unique exhibit for sneaker lovers.

BROOKLYN — It’s a scene we see time and time again where sneaker enthusiasts – or as they’re better known as “sneaker heads” – form endless lines and spark chaos outside shopping malls, all in a quest to nab the latest pair of kicks.

If the so-called “sneaker head” mentality is something foreign to you, you will probably never understand it unless you head down to the Brooklyn Museum for a crash course in the very unique culture.

From a pair of 19th century rubber over shoes to the original Converse All Star, The Rise of Sneaker Culture exhibition at the Brooklyn Musuem explores the social evolution and cultural significance of the footwear billions of people across the globe wear today.

“Sneakers I think to most people are kind of like this ever-current item, you don’t think about it having this historical trajectory,” Lisa Small, curator for the exhibition at the Brooklyn Museum, told PIX11 News.

While taking a look at its technical innovation and fashion trends, the exhibit also zeros in on those pivotal moments in history that thrust the sneaker into the mainstream

When Air Jordans made their debut in 1984, it changed everything.

The fact that the NBA banned them for the lack of white in their design made them all the more desirable, especially considering that Michael Jordan ignored officials’ warnings and wore them anyway.

“Being fined $5,000 for Michael Jordan to play in these sneakers was the greatest thing to ever happen to sneaker culture and for Michael Jordan in general,” Calvan Fowler said, referring to the amount the NBA fined Jordan every time he hit the court with the banned kicks on.

Fowler knows a thing or two about sneakers. He directed the upcoming documentary “Jordan Heads” which explores the roots of the Jordan footwear phenomenon.

“What we see in the media – people going crazy for sneakers and knocking people down and robbing people for shoes,” he explained. “It’s not what its all about.”

“These people are just like you and me and they have a passion for sneakers.”

The exhibit, which is the first of its kind in the United States, is now open to the public through October 4th.