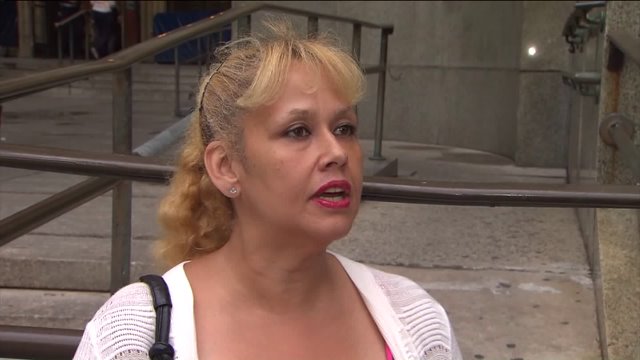 NEW YORK — Behind every grand policy initiative, there are real stories and real people.

People like George Rojas who are hoping to end up on the right side of reform.

“It’s tough man, ya know? You can’t really do anything about it,” George told PIX11.

We spoke to George Wednesday evening while he was still in custody, on a payphone, inside Manhattan Criminal Court.

His girlfriend Linda told PIX11 he was awaiting a court appearance for violating an order of protection against his ex-wife.

They were hoping the judge would not set bail, bail they could not afford.

“It’s madness. It’s like, the more days you’re here, you missing out on work. The employer, he’s gonna fire you, regardless of ya know - the situation,”

Low level offenders would not lose their freedom, jobs, time with their families simply because their funds fell short.

“We have been here all day, and they have not told us anything,” said Linda.

Linda tells us George has been down this road before, except she's had to fight and scramble to come up with his bail money.

“Struggling, collecting, owing, getting loans. You have to put everything out there, whatever you can. Pawn it. You stop feeding your family, you stop paying your bills because you want your husband or boyfriend home,” said Linda.

Police Commissioner Bill Bratton warned that the proposal should not give a "no bail" pass to people arrested on a domestic violence or drunk driving incident.

The Manhattan DA's office will fund a majority of the $18-million initiative, which would allow at least a few more thousand low level offenders citywide to enter a supervised release program which is already operating on a trial basis.

“If bail, I’m hoping it’s low. We cannot afford to pay too much of it," said Linda. "If you can’t afford it, they’re definitely going to be put in the system in Rikers."