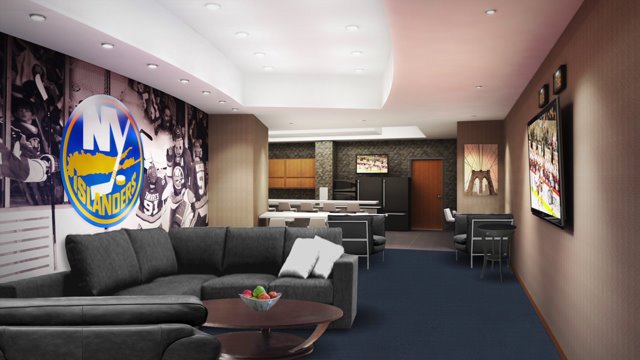 Brooklyn`s newest professional team is getting ready to move into Barclays Center.

BROOKLYN — In the depths of Barclays Center work is underway to make sure the New York Islanders feel right at home when the puck officially drops next season.

"In order to maintain, to keep players, to sign players in a competitive market, you need to have a facility that is top notch," said Barclays Center General Manager Steve Rosebrook.

Rosebrook took us on a tour of the Islanders new 10,000 square-foot campus Wednesday.  Crews expect to complete the project in August.  In addition to keeping the ice cool and changing out the nets, Rosebrook says there are a few differences construction crews had to keep in mind when designing the new facilities.

"One thing with hockey, obviously, is it's not like basketball where you can walk on any surface.  When you have skates on you have to walk on rubber, so this whole space is going to be outfitted with rubber and carpet," said Rosebrook.

With the Stanley Cup banners already hanging high in the rafters, Barclays Center is starting to feel like home ice for the Islanders.  The hope is that feeling will continue throughout the campus from the coach's quarters to the state-of-the-art locker room.

"It's shaped this way, oval, for a reason right.  So that teammates have to look teammates in the eye.  So that the coach stands in the middle, everybody can see him," said Rosebrook.

The team will also have a great lounge for the players to use pre and post game, and another option for when the players don't feel like sticking around.

"In sports, when you want to get away from the media, there's always a back door.  So you can take that and head right out to your car," said Rosebrook. "But hopefully they won't have to use that too often."