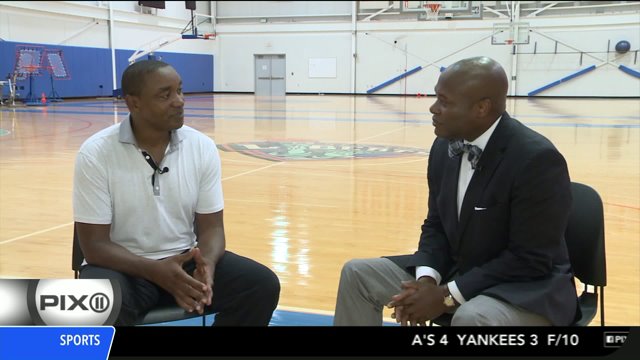 TARRYTOWN, N.Y.-- It's been over a month since two-time NBA Champion, Isiah Thomas took over as president of the New York Liberty.

"Zeke," as he is commonly called, has returned to New York as new man, he claims, and a new lease on life.

"The fans have been great, the team is in first place" Thomas said. "Nothing can be better right now."

Knicks owner Jim Dolan brought the 12-time All-Star back to the organization in hopes of winning a WNBA title, but critics are quick to point out his disappointing years from 2003 to 2008 as Knicks general manager and coach, which included a $11 million sexual harassment suit in 2006.

Thomas said all these issues are in the past. He's already addressed them each and all his players about what happened with his old team.

"You can only put your best foot forward and be judged on your character and your actions," Thomas said. "I'm comfortable in the character and the man I represent and that I present."

He learned from his mistakes and wants to be a teacher of the game.

Rookie Brittany Boyd who like Thomas is an undersized point guard, but his valued tutorial has been great in her transition to the professional game.

"It has been a very good experience," Boyd said. "I'm excited to learn more from him."

Thomas also said he is happy where he is now with the Liberty but did not discount the fact he would one day re-enter the NBA.

"You never know where life is going to take you," Thomas said. "As long as I'm in the game of basketball I'm happy."