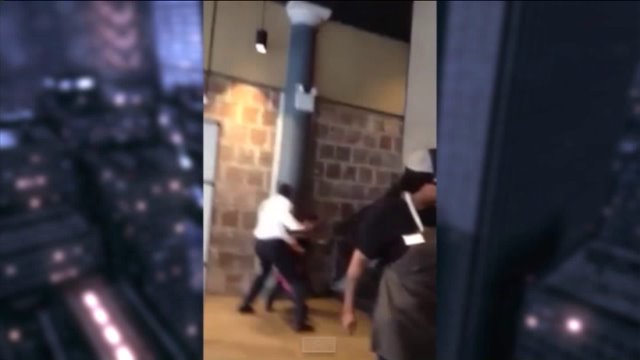 GRAMERCY PARK, Manhattan — A graphic video shows a male manager at a Manhattan Panera Bread restaurant brutally smacking down a female employee who was in the process of quitting, but both are now out of a job.

According to Gawker, the video was taken at the Panera Bread on Park Avenue South near 23rd Street in Gramercy Park.

In the video, the woman throws her bag of chips onto the ground and screams before the manager smacks her twice.  According to Midgarr,  the YouTube user who uploaded the video,  the confrontation began earlier, when the woman was physically thrown out of the store. But she returned, sparking the confrontation that was filmed.

"You might wanna say she hit him first, but really he had FULL CONTROL over her the entire time, was throwing her around, I think she gets one slap in that was louder than it was painful," a tipster told Gawker.

The company told PIX11 that it has no tolerance for the behavior caught on tape, and that both employees were now terminated.

Panera "worked swiftly with authorities to investigate. The associates who were determined to be involved no longer work for Panera,” according to the statement.