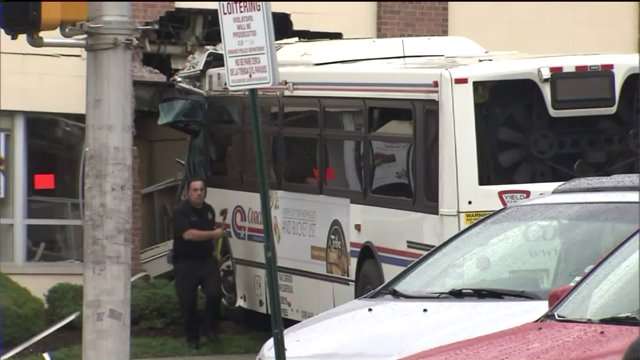 Three people were injured, one seriously in a bus crash.

ORANGE, N.J. — Three people were injured when a bus crashed into a building after a crash in Orange.

The crash happened at the intersection of Main Street and High Street just before 3 p.m., when a Coach USA bus barreled into a Bank of America.

"ONE Bus can confirm that one of our vehicles traveling from Orange heading towards East Orange with a final destination to Newark was involved in an incident today," said Sean Hughes, director of corporate affairs for Coach USA.

Authorities say the bus struck a car, and one of those cars hit a pedestrian.

The pedestrian, bus driver and another driver were taken to hospitals, their conditions are unknown.

The bus driver was the only person aboard the vehicle at the time of the crash.

"Safety is our number one priority and ONE bus is fully cooperating with the authorities with their investigation into the incident," said Hughes.