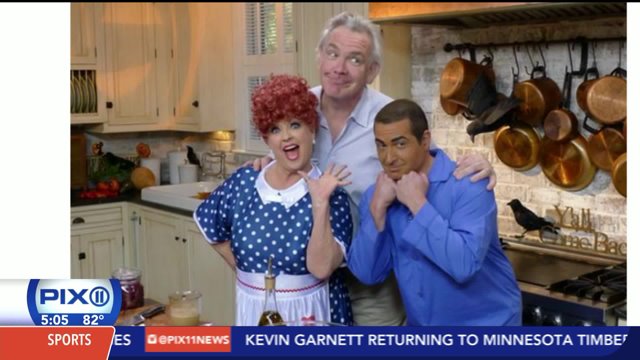 NEW YORK – Paula Deen is once again being blasted for a lack of racial sensitivity after the former celebrity chef tweeted a photo of her son in brownface.

Deen, 68, posted a photo of herself as Lucille Ball and her son Bobby dressed as Ricky Ricardo, who was played by Cuban-born actor Desi Arnaz, with his face painted a yellowish-tan color.  Deen tweeted, “Lucyyyyyyy!  You got a lot of esplainin’ to do #TransformationTuesday @BobbyDeen.”

The former Food Network chef was blasted by the public in 2013 and ultimately fired after admitting to using the n-word and making statements deemed by many to be shockingly insensitive.  Retail giant Wal-Mart, Smithfield Foods, QVC and Caesars Casinos also cut ties with her.

"I is what I is, and I'm not changing," Deen told Matt Lauer in a "Today" show interview. "If there’s anyone out there that has never said something that they wish they could take back, if you’re out there, please pick up that stone and throw it so hard at my head that it kills me.”

She has since been working on a comeback and trying to reinvent her image as a lovable Southern chef, but Thursday's tweet looks like it's going to hurt her.

Paula Deen’s Social Media Manager posted a picture this morning of Paula and Bobby Deen dressed in costume as Lucy and Ricky, from I Love Lucy. This photograph is from a Halloween episode of Paula’s Best Dishes that aired in 2011.

Paula immediately had this picture taken down as soon as she saw the post and apologizes to all who were offended. As such, Paula Deen Ventures has terminated their relationship with this Social Media Manager.

Paula Deen is that neighbor you invite to your Tupperware party and after a glass of wine or two, proves what everyone says about her.

@Paula_Deen @BobbyDeen the Internet is forever. When you do decide to back peddle, this will always be there. pic.twitter.com/ckUJvry1I0

I've got nothing else to offer today so here's a photo of Paula Deen on a stick of butter in front of an explosion pic.twitter.com/qdQKRJUI12

Let's be fair and remember that Paula Deen is equally prejudiced against the arteries of all people, regardless of color.