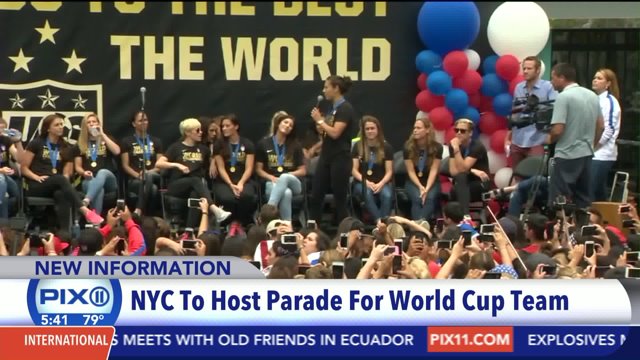 NEW YORK - City officials announced Tuesday that a ticker-tape parade will be held for the U.S. Women's National Team in celebration of their World Cup championship over Japan.

The parade will begin Friday, July 10, at 11 a.m. and wind up the Canyon of Heroes along Broadway from the Battery to City Hall.

Congrats to @ussoccer_wnt on Sunday’s victory! Celebrate the incredible #USWNT Friday at 11am: http://t.co/7VrhhUveDQ pic.twitter.com/d77LCaReL2

The U.S. Women's National team stunned Japan with a 5-2 victory, steamrolling their defense in the first minutes of the first half.  New Jersey native Carli Lloyd poured in two goals in the first five minutes en route to the first-ever hat trick in a women's final.

The Canyon of Heroes route has been the scene of ticker-tape parades dating back to the 19th century.  Recent parades have celebrated the Super Bowl and World Series victories by the Giants and Yankees, but parades have also been held for politicians, pioneers of air and space travel, journalists, heads of state, firemen, sea captains, soldiers and even a virtuoso pianist.

The first officially-organized ticker-tape parade was held for soldiers returning home from victory after World War I, according to the Downtown Alliance.

The Mayor's Office is offering tickets to see the ceremony at City Hall at the conclusion of the parade. Here's how to get them: http://www1.nyc.gov/nyc-resources/world-cup-champions.page