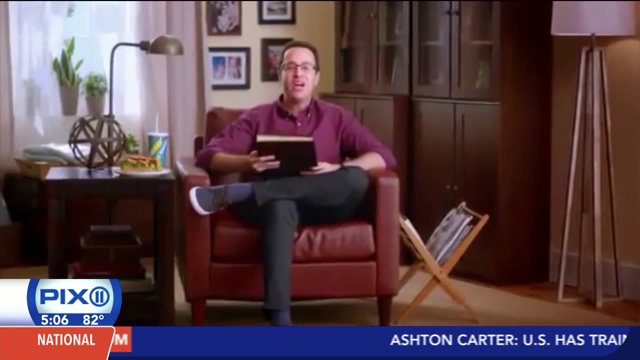 AP reports Subway says it's suspending relationship with spokesman Fogle. State and federal investigators were serving warrants at Fogle's Indiana home in connection with a child pornography investigation, those sources told the station.

The raid began about 6:30 a.m. Tuesday. An evidence truck could be seen parked in the driveway.

Earlier this year, the former director of the Jared Foundation, started by Fogle, Russell Taylor was arrested on suspicion of possessing and producing child pornography, FOX59 reports.

Investigators said a search of Taylor’s home turned up more than 500 videos with images of child pornography. In May, Taylor unsuccessfully tried to kill himself while in jail.

Fogle said the foundation severed all ties with Taylor following the arrest. Investigators wouldn’t say if Tuesday’s raid was connected to that case.

Fogle gained national fame after attributing massive weight loss to eating Subway sandwiches. He was a freshman at Indiana University at the time and later became a visible presence in ad campaigns for the restaurant, pitching its sandwiches and touting their health benefits.

"We are shocked about the news and believe it is related to a prior investigation of a former Jared Foundation employee," the company said. "We are very concerned and will be monitoring the situation closely. We don't have any more details at this point."

We are shocked about the news & believe it is related to a former Jared Foundation employee. We are monitoring the situation closely.