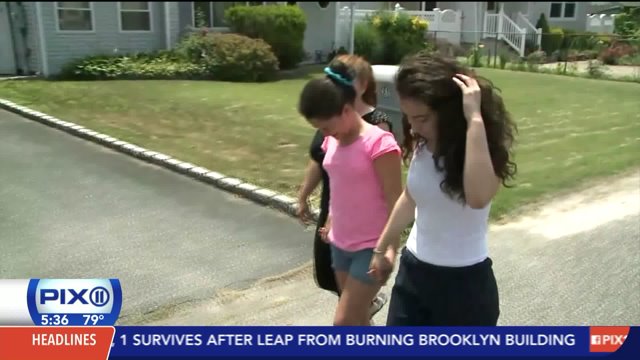 A day at the beach takes a dangerous turn when two sisters were pulled out to sea by a riptide.

MASTIC BEACH, N.Y. — It was the end of what seemed to be a perfect beach day at Smith Point County Park when all of a sudden a riptide started pulling two sisters out to sea.

At around 8 p.m. Sunday, a strong current dragged Andreina Collado, 15, about 75 yards from shore. Her sister Jairiamy, 11, was even farther out in the water, about 100 yards. And little Jairiamy could barely keep her head above water.

Their 42-year-old mother raced into the surf to try to help, but she collapsed when she was waist deep in the water.  Her daughters say she had a panic attack.

Luckily for the Collado family, two marine officers were in the right place at the right time, patrolling nearby and jumped in to help the two drowning sisters and their mother.

"A lot of the times when I was under water I was praying... Jesus please help me and my sister get out of this," Jairiamy added.

Officer Chris DeFeo, a Marine Bureau police officer said that the girls were desperately flailing their arms. "I took off my uniform and with some others, we got them out." Fortunately for the Collado family, Officer DeFeo had spent ten years as a Brookhaven life guard.

The two sisters were pulled to safety by two officers, a relative, and an unidentified good samaritan.

"Thank you for saving my life.You're a great person," Jairiamy said.

The Collado family wants to extend a big thank you to the officer who rescued them. They would also like to thank the Good Samaritan who aided the rescue.