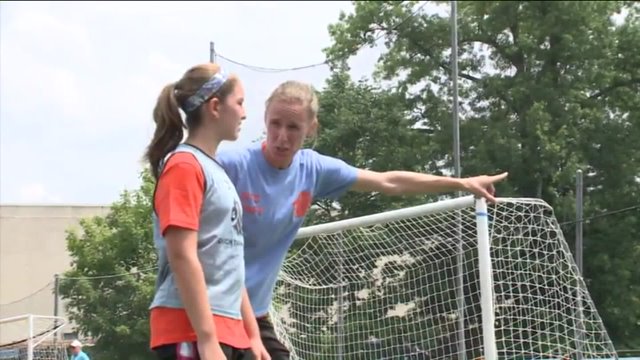 The Women`s World Cup drew in millions of viewers as Team USA dominated Japan. The win could have an impact on Americans view women`s professional sports.

SOMERSET, N.J.  — What kind of impact will Sunday night's historic victory by Team USA have on the future of girls soccer?

Marieke Laurens-Van Tienhoven, a coach at the Dutch Total Soccer facility in Somerset sums it up as follows, "I think it's going to inspire girls like this who are right here, inspire them to play soccer for life and create a bigger passion for them to join the game and play the game."

The 32-year-old is a native of the Netherlands who has played or coached soccer for more than 25 years.  Team USA's victory is one that will forever change the field of play for the young female players attending her camp, "I think it's the best thing ever, because for them there is a whole new soccer world opening."

For Jordi Meijer, soccer has been a part of his life since he was in diapers and learning to walk, "The first step I took was chasing a soccer ball."

Now some 38 years later, soccer still dominates his life as one of the organizers of this week's all female camp at Dutch Total Soccer, "I think the interest always grows when teams do well."

That is what Meijer has seen when U.S. teams do well at the World Cup and even  prior to the women culminating their run with Sunday nights championship domination Meijer was seeing much interest from parents looking to sign their daughters up.

"Our camp numbers have increased because of the popularity and when people get excited they want to be a part of it."

One of those excited is Izabella. A camp attendee who has been playing soccer for five years.

Which she describes as, "half my life."

But on Monday she shared with PIX11 News, as to how she started by playing with boys and "zero" girls, but in recent years she has played primarily with girls, "A lot actually."

One of them is Hannah. The ten-year-old remembers exactly how she started out playing, "By just putting pine cones on the ground and dribbling through pine cones."

However, unlike nearly every other girl on the field in Somerset on Monday, she found inspiration for the game not from the women of Team USA but from a woman more close to her heart, "I think what started making me a bit more interested was my mom, because she played soccer when she was little and she always talked about these stories about her soccer."

Yet it is the story of Sunday night's game and its outcome that will forever live with these little Carli Lloyd's in the making. Girls who started this day with a new message. One that Hailey conveyed rather simply, "Girls like... they are saying to boys that we can be just as good as you. Like we can do whatever you can do."

As for her response when she was reminded that the men's team has never won a World Cup? "That's good."