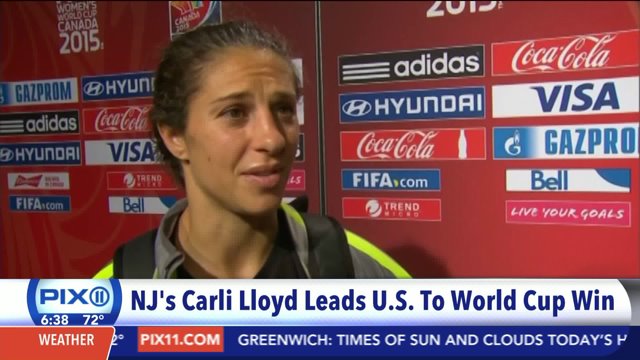 Carli Lloyd was a bit of an afterthought, a bit overlooked.

But the 32-year-old came out of soccer's big event winning our hearts and the respect of her opponents.

The midfielder has been in the U.S. team since 2005. But the New Jersey native wasn't front of mind, especially after her so-so performance in U.S. opener against Australia.

But oh, how she bounced back.

Now, folks are joking her picture should be placed on the $10 bill .

She says the place she was born and raised is a working class small town. She used to play pickup soccer against some Turkish expats or she'd just practice on her own, enjoying the solace and working on her shot. While she may move one day, the Garden State is her home.

Lloyd tells her loved ones to watch from home when she plays in a big event. "I guess we kind of figured out the pattern. I realize when I go, you don't win," her fiance, pro golfer Brian Hollins, told USA Today. In her postmatch interview Sunday, Lloyd thanked him and the other members of her family for their support. Then she looked at her phone -- 372 texts.

Her pump up music is surprisingly chill

Lloyd told ESPN she likes to listen to a variety of artists to get her ready to play. Some of the tunes are more mellow than you'd think -- "Photograph" by Ed Sheeran, "Believe" by Mumford & Sons, and "Let It Go" by James Bay, for example.

She comes through big time

She scored a goal in every U.S. game in the knockout stage of the Women's World Cup and had one assist. She had the game-winner against Germany in the semifinals and China in the quarterfinals. She helped create or score seven straight U.S. goals.

She's the first woman to score three times in the final. She has the fastest hat-trick in the Women's World Cup. She has the earliest hat trick in a World Cup -- men's or women's -- by scoring thrice before 16 minutes were even on the scoreboard. And she is the first player, male or female, to score a gold medal-winning goal in two consecutive Olympics.

She believed she could fly

In Jersey, while she was training for the World Cup earlier this year, Lloyd said at one point she zoned out and started dreaming about a final. "And visualized scoring four goals." Close enough, Carli. Close enough.

She sports some serious bling

Two Olympic gold medals. A World Cup winning medal (and one silver and one bronze). The Golden Ball for best player in the World Cup.

She lost the golden boot by this much

With her hat-trick, Lloyd scored six goals in the tournament. So did Germany's Celia Sasic. Both had one assist. But Sasic played fewer minutes in the tournament, so she won the Golden Boot award, given to the player who led the tournament in scoring. Lloyd still received a silver trophy for second.

She is getting so much love

Even before Sunday's final ended, someone tweaked her Wikipedia entry to list her position as "President of the United States."

Nice thought, but it can't happen. By law, the people on U.S. money can't be alive.

And she is very much alive, my friends. Alive and kicking.