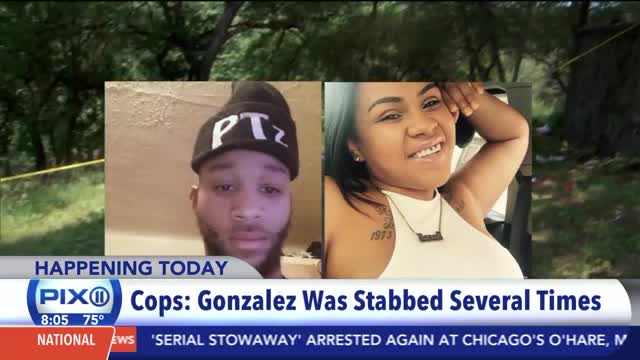 Police say the father of the victim's 2-year-old son is the prime suspect in the case.

THE BRONX -- New details emerged Monday after a young mother was found stabbed to death in a Bronx park over the weekend, allegedly by the father of her 2-year-old son.

Jasmine Gonzalez, 22, of the Bronx, was discovered unconscious and unresponsive  with multiple stab wounds to the torso shortly before 6 a.m. Sunday inside Bronx River Park, police said. She was pronounced dead at the scene.

Prosecutors allege she was likely killed sometime between 2:30 a.m. and 5 a.m. Sunday near Bronx Boulevard and East 226th Street, according to a criminal complaint obtained by PIX11 News.

Later that day, police arrested Khiry Borden, 25, of Brooklyn. Borden and Gonzalez have a child together, prosecutors said.

Gonzalez's sister Jayselle told the New York Daily News that police recovered a backpack belonging to Borden stashed inside the family home —containing a pair of jeans soaked in blood, a towel and an empty sheath for kitchen knives.

"He came back here while everybody was sleeping. He changed his clothes to a new set of clothes he had in his bag," Jayselle Gonzalez is quoted as telling the paper.

Relatives told PIX11 News the suspect and victim have a 2-year-old son together and although they have had their problems, they never expected such a violent end.

"We never thought something like would happen," the victim's relative said. "He never showed anything against her, against the child. He was a very respectable person."

Gonzalez's family members broke down at the scene of the alleged murder upon seeing her body.

"Oh my God! Oh my God! That's her," said Gonzalez's mother, who also pointed out a ball cap at the scene she claimed belongs to Borden, whom she called "the devil," the Daily News reported.