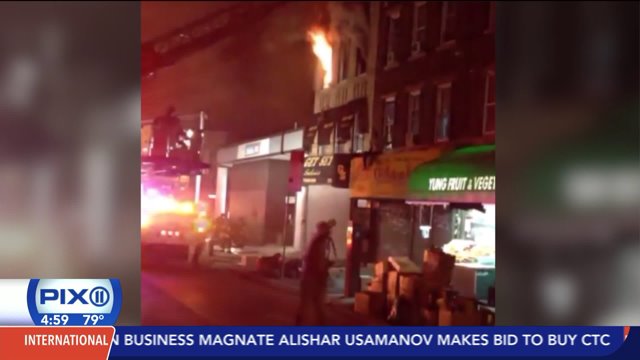 A fire broke out around 1:48 a.m. Monday morning on Nostrand Avenue near Flatbush Avenue. Six people were hospitalized. Staten Island University Hospital confirms one man, a father, has died from his injuries.

The flames stormed through the building just before 2 a.m. this morning on Nostrand Avenue near Flatbush Avenue.

At least two apartments inside the charred building were completely destroyed. A storefront on the first floor of the building was water-damaged. Directly next door, at least one apartment was heavily damaged, she said.

“I don’t know what I’m going to do,” said Juldeh Bah, a man who lived next door. Demolition crews were already working inside his apartment this afternoon. The place was covered in debris and shattered glass. Bah said he lived there with his four brothers. The five men were not able to salvage anything during their escape besides the shirts on their backs.

“We stay outside all night. We don’t have no where to go,” said Bah's brother, Assouf Compore.

A total of six individuals were hospitalized. Staten Island University Hospital confirmed that one man, a father, has died from his injuries.

Devastating cell phone video of the fire showed at least one man jumping from the burning building, eventually laying motionless on a mattress on the pavement below.

“He was like, burned all over,” said Taliq Thomas, a 16-year-old who inside in an effort to get people out.

Officials determined that the fire was started by extension cords and power strips.