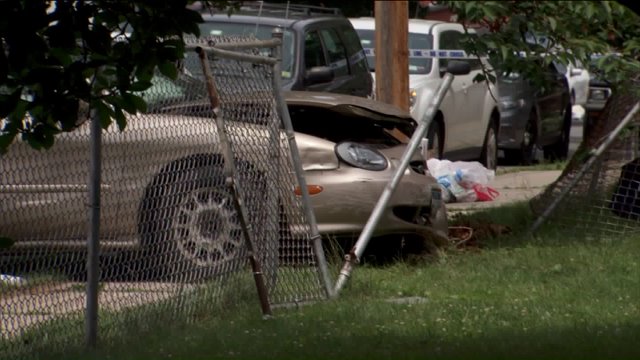 An out-of-control car crashed into a fence of a Staten Island home on Monday morning, leaving the passenger of the car dead and sending the driver to the hospital, said the police.

STATEN ISLAND, N.Y. — An out-of-control car crashed into the fence of a Staten Island home Monday morning, killing a passenger and sending the driver to the hospital, police said.

The police responded to a 911 call around 10 a.m. at 35 Jackson avenue, where officers found the badly-damaged, gold-colored station wagon halfway on the front lawn.

Police found 81-year-old Mary Pannese with badly injured in the passenger seat.  Emergency Medical Services took Pannese to Staten Island University hospital where she was pronounced dead. The 80-year-old driver, whose name was not released, was also taken to the hospital, but was in stable condition, police said.

A preliminary investigation determined the crash was caused when the driver lost control of the vehicle, but it's not clear how it happened.