Canadian man arrested after ‘lifting off’ in lawn chair 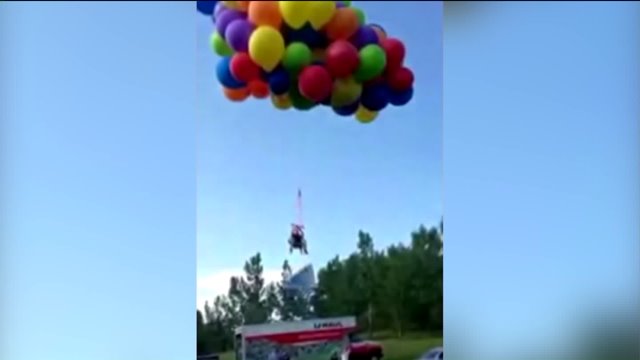 He was trying to promote his cleaning supply business.

Daniel Boria says he was trying to get attention for his cleaning business when he tied more than 100 helium balloons to a lawn chair and soared through the sky over his city.

But soon after he opened a parachute and jumped back on the ground, police in Calgary, Canada, arrested him Sunday, charging him with one count of mischief causing danger to life.

"At this point, we have no reports of anybody finding anything or anybody being injured," Grant said, "but it's a big concern for us, and I don't think it's something he took into account."

Boria, 26, told CNN he devised his plan about two months ago. Originally, he was hoping to pay a plane or helicopter service to fly him over the crowds at the Calgary Stampede. But Boria said he had to take matters into his own hands after the services rejected his request, telling him there was a no-fly zone policy over the popular rodeo.

Equipped with an oxygen tank and a parachute, he took off Sunday evening.

"I'd estimate I was going up about 500 to 1,000 feet in a minute," he said. "I was looking down on the city and watching 747s and planes approaching the local airport."

It wasn't the first time Boria had found himself floating far above his hometown; he's skydived a few times in the past. But this, he said, was different.

Boria flew over the stampede grounds, but turbulent weather led him past his destination. He deployed his parachute and landed by train tracks in a rocky area.

He had a few cuts on his body and was worried he'd broken his foot, but he was still hoping he could walk away unscathed.

"A guy was driving by and was going to give me a ride," he said.

But instead, Boria got a ride in a different kind of vehicle.

"A police officer arrived and put two and two together and put me in custody," he said.