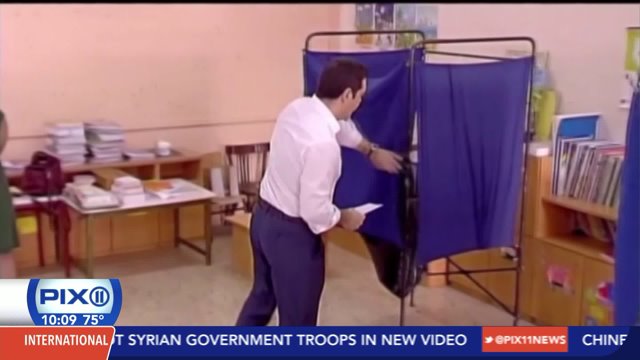 After defaulting on a loan repayment to the International Monetary Fund, Greece voted "no" to a bailout today.

LONDON (CNNMoney) -- Greece has voted by a big margin against Europe's latest bailout offer, raising the prospect of an economic disaster for the country and putting its future in the euro at risk.

With more than 94% of the vote counted, Prime Minister Alexis Tsipras had 60% support for saying "no." He hopes this will force Europe to hand over more money with less austerity attached, and cancel some of Greece's enormous debt.

Thousands of Greeks celebrated in the streets of Athens after the vote on Sunday. But the result sets Greece on an uncertain path that could force it to abandon the euro and print its own currency -- with huge damage to the economy.

Greece urgently needs cash to reopen its banks, which have been shut for a week, and for pensions and wages.

How Europe and the International Monetary Fund will respond is unclear. They've already rescued Greece twice since 2010, with loans totaling 240 billion euros.

Before Sunday's referendum, European leaders said a "no" vote would destroy the basis for talks, because it would show that Greece was unwilling to take the steps needed to put its finances in order and get its economy growing.

Creditors have also said a new bailout could mean even harsher austerity than the offer that was on the table. That's if any negotiations can now take place in a very sour atmosphere of recrimination.

Tsipras had "ripped apart the last bridges that could move Europe and Greece towards a compromise," said Sigmar Gabriel, leader of Germany's Social Democrats and deputy to Chancellor Angela Merkel.

Merkel and French President Francois Hollande are due to meet Monday evening in Paris to discuss the implications of the referendum.

Other senior officials, including European Central Bank President Mario Draghi, will also talk Monday, before a summit on Tuesday of heads of government of all 19 countries that use the euro.

Many Greeks have had enough of years of cuts to wages and pensions. They would rather reclaim control of their economy by leaving the eurozone and returning to the drachma.

The huge devaluation and impoverishment that implies terrifies others. They want Greece to keep the euro, and stay firmly rooted in the European Union, even if it means greater sacrifices.

Either way, something needs to change fast.

Greece is on the brink of going bust, and the economy is gradually grinding to a halt. Its credit lines with the IMF and Europe have collapsed.

Banks have been shut for a week, and ATM withdrawals are limited to 60 euros a day. In practice, a shortage of 20 euro notes means some people are only able to get their hands on 50 euros.

The banks won't be able to reopen on Tuesday as scheduled unless the ECB resumes emergency lending -- and that appears unthinkable without an unequivocal commitment from the Greek government to reform.

Some essential services are starting to feel the pinch, too.

Dr. Theo Giannaros, head of the Elpis hospital in Athens, told CNN that supplies of medicines and basic foodstuffs were running low.

The prospect of a failing state in southeastern Europe alarms policymakers from Brussels to Washington. Greece is a member of NATO, but has been flirting with Russia. And it is the gateway to Europe for many migrants fleeing war, terror and poverty in the Middle East and Africa.

-- Isa Soares and Zahra Ullah in Athens, and Sara Mazloumsaki and Christine Theodorou in Atlanta contributed to this article.