Turmoil breaks out in Brooklyn after American flag is burned 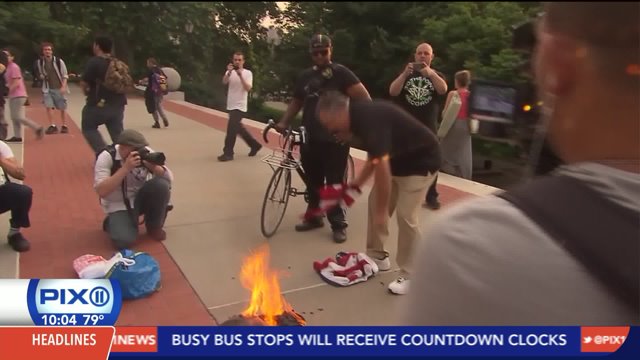 A scheduled burning of the U.S. flag was eventually brought to a halt by a civilian in Brooklyn on Wednesday evening. The burning which was scheduled to start at 7:30 went ahead as planned but wasn't able to be fully completed.

As smoke appeared in the park, flag defenders descended to extinguish the American emblem when one flag went up in flames.

That's when civilian John Carroll of Queens came in.

Carroll grabbed the flag from the flaming grill and worked to put it out.

Several fights broke out shortly after, causing police to step in to ease overflowing tensions.

They removed a few people from the park for their own safety.

Police said there were no arrests made.

It was the end result of an effort that drew critics from the very beginning.

Disarm NYPD announced their protest on Facebook several days ago, saying both the American and Confederate battle flags symbolize a history of oppression in the U.S., and flag burning is a legal expression of their views.

But to a retired army sergeant who served during September 11, the American flag has a different meaning.

"Two weeks into being at the Pentagon, A huge American flag was draped over the Pentagon to represent were still standing. We're still here," he told PIX11.