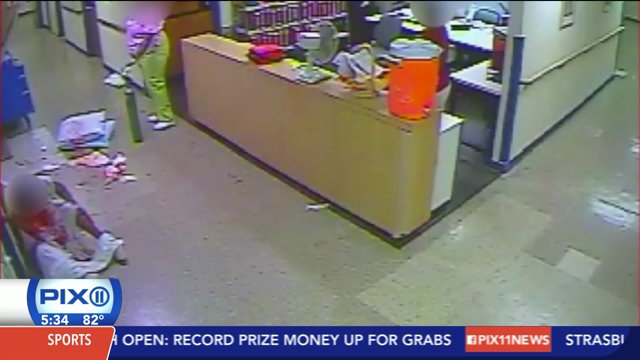 FAR ROCKAWAY, Queens — Three health care workers were arrested and charged with neglect after allegations that they abused patients at the nursing home where they worked.

The workers were arraigned Wednesday afternoon in Queens Criminal Court. They all entered not guilty pleas.

But prosecutors say this trio was trusted to care for some of the most vulnerable people in our city, and that trust was broken with brutality.

One disturbing incident was caught on camera.

The man lying on the ground, is a nursing home resident at the Peninsula Nursing Facility in Far Rockaway.

Hallway video from Oct, 23. 2014 shows the man  wearing a gown soaked in his own blood.

But he was left in that bloodied condition for 12 minutes, until another defendant, Emmanuel Uoft, grabbed the resident by the arm and dragged him down the hallway to his room.

They say the patient was later spotted on camera, still bloodied, crawling on the floor. Only this time, he had a wound to the head and jaw.

The third defendant, Funmiola Taiwo ignored him, and Emmanual Uoft, allegedly dragged him down the hallway for a second time.

After their arraignment all three defendants tried to tuck away in a corner, or run from our cameras. They offered no defense or explanation.

But the attorney for one nurse, did stop and respond to the cruel details laid out in court.

"The allegation is that my client ignored this person and should have been caring for this person however, the allegation seems to say that there was a period of time 20 minutes in which my information that I have the limited, information that I have at this point is that that is definitely not accurate and that my client did assist in treating this particular person and that in fact did call 911," said Victor Knapp, attorney for Esohe Agbonkpolor

The three nurses are no longer working at the Peninsula Facility, they have all either resigned or been fired.

Each is charged with endangering the welfare of an incompetent or physically disabled person, a felony that can carry up to four years in prison.