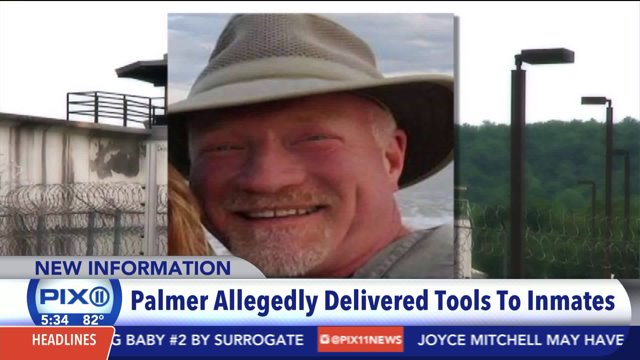 PLATTSBURGH, New York (CNN) -- A corrections officer from the Clinton Correctional Facility in upstate New York has been charged with three felonies and a misdemeanor in connection with the escape of two convicted killers earlier this month, the prison guard's lawyer said Wednesday.

The longtime guard gave at least one of the prison escapees a screwdriver and a wrench to help fix electrical breakers in the catwalk area behind their cells, an official familiar with the investigation told CNN.

Palmer told investigators he supervised Richard Matt and David Sweat doing the work and took the tools back before the end of his shift, the official said. Authorities have said Matt and Sweat used the catwalks during their June 6 escape.

The tools were found at Palmer's home after police executed a search warrant, the official added.

"I won't comment specifically on whether or not my client did that," Brockway told CNN's "Anderson Cooper 360˚."

Investigators also believe Palmer destroyed some of the paintings Richard Matt made for him, the official said.

"Mr. Palmer has been completely cooperative with the investigation," Brockway said from outside Plattsburgh Town Court, where his client was arraigned Wednesday night. "He will continue to cooperate. He's a man of integrity who made some mistakes."

The state police said Palmer pleaded not guilty on all the charges. He will spend the night in the Clinton County Jail and is due back in court on Thursday. Brockway said he intends to get his client out on bail as soon as possible so he can "take care of his ailing wife."

Palmer, who has worked at the prison for 27 years, allegedly took frozen meat embedded with smuggled tools to the inmates' cell area in the now-closed honor block, Clinton County District Attorney Andrew Wylie said Wednesday. Brockway said Tuesday his client was unaware there was contraband in the meat.

"He understands that he made a mistake with the whole meat fiasco," Brockway said.

Palmer's arrest comes as more than a dozen investigators from the New York State Inspector General's office arrived at the prison to investigate possible breaches of security protocols that allowed Matt and Sweat to escape, a state law enforcement official said.

The investigators are going through visitor logs and documents related to prisoner and employee movements at the jail, the official said.

Earlier Wednesday, Wylie said Joyce Mitchell, a supervisor in the prison's tailor shop, smuggled tools embedded in meat through the main gate at the prison.

She placed the meat in a freezer in the tailor shop, according to Wylie, and then she asked Palmer to take the meat to the inmates' cell area in the honor block.

Mitchell, who has been charged with aiding the escapees, admitted to putting hacksaw blades and drill bits into a hunk of hamburger meat, according to the prosecutor. Palmer could have put it through a metal detector but he didn't, which was a violation of prison policy, Wylie said.

Mitchell did not have access to the cells, which is why she needed Palmer to hand it off, according to the prosecutor.

CNN first broke the news Tuesday of the tools frozen in meat.

"Before he handed off the meat, he asked if there was anything wrong with it and she said no," Brockway told Cooper.

Palmer did not know what was inside the package, Brockway said, adding, "The only mistake he made was trusting Joyce Mitchell."

A former inmate who served time with two New York prison escapees told CNN on Wednesday that he saw what appeared to be a relationship between one of the escapees and a prison worker who is now charged with helping the convicted killers break out.

While at Clinton Correctional Facility, Eric Jensen said he knew Richard Matt and David Sweat, and the latter may have had sex with Mitchell

Mitchell's lawyer said that was not possible and his client has denied it.

"It would be (like) when the cute guy at the high school asks the girl to prom and the look on her face every day when they would get together," Jensen said. "They would laugh, giggle -- conversations all day long."

Mitchell and Sweat would go to the back of the tailor room to count garments, he said, adding that inmates could get bonuses for producing more than a quota required.

"It was a running joke inside the tailor shop that (Mitchell) was his 'boo,'" Jensen said.

She sometimes brought him tattoo or art supplies and food that inmates couldn't get inside the prison, Jensen said.

She often mingled with the other inmates and sometimes brought doughnuts. Some viewed her as a grandmother figure, he said.

Mitchell "used to always treat" Sweat well, Jensen added, saying that inmates believed they were having sex. Sweat wouldn't join other inmates when they went to eat, he said. "He'd stay back with her in the tailor shop."

The inmates asked Sweat if anything was going on between him and Mitchell.

"He used to laugh," Jensen recalled. "He would never confirm or deny it."

Sweat didn't have much to say, Jensen said. "He never was a very outspoken person. The reason me and him bonded so well is because I'm an artist. He's an artist. We shared our artwork. He was very intricate with his details."

Jensen was in Clinton from June 2011 to March 2012 for possession of stolen property. He finished his term at Attica Correctional Facility.

Mitchell's attorney, Steve Johnston, said that while he hadn't spoken with his client about this allegation, she has told investigators and him that she did not have sex with Sweat.

"Furthermore, it would seem that such an allegation defies credibility since it is my understanding that there is always at least one corrections officer within the tailor/sewing shop at all times when any inmate is in the shop," Johnson told CNN's Brian Todd.

Mitchell was investigated in the past for an inappropriate relationship with Sweat that led corrections officials to move him out of the tailor shop in 2013 and keep them separated, Wylie has said. The corrections department found there wasn't enough evidence to punish her.

A source close to the investigation told CNN that 2013 was the year when Mitchell started having a sexual relationship with Matt.

Could inmates be armed?

The search for Matt, 48, and Sweat, 35, continued Wednesday for the 19th day. Officials expressed concerned that the escapees may have acquired long guns from one of the seasonal cabins in the area.

When asked during a midday news conference if a shotgun was missing, Maj. Charles Guess of the New York State Police said he doesn't have information about a specific shotgun.

"I would point out to you that, those of you who are not familiar with the area, just about every cabin or out building in the North Country has one or more shotguns or weapons, and we have since Day 1 operated under the belief that these men are armed," he said.

Responding to a question from a reporter about whether a bloody sock had been found, New York State Police Trooper Maj. Charles Guess said he could not confirm or deny that.

"We have no definitive information to reveal that someone was injured," Guess said.

"Let's face it, a bloody sock could mean somebody had a blister or it could mean a lot worse," he added.