Boston Marathon bomber Dzhokhar Tsarnaev: ‘I am sorry for the lives that I have taken’ 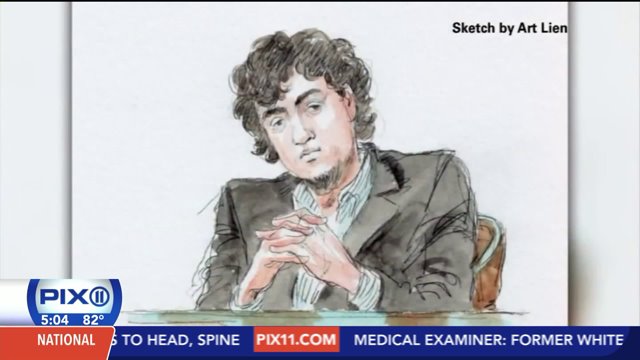 BOSTON — Boston Marathon bomber Dzhokhar Tsarnaev on Wednesday ended his long silence, asking Allah to help his victims and their families and apologizing for the pain and suffering he caused two years ago.

"If there is any lingering doubt ... I did it along with my brother," he said, referring to the bombings carried out by him and his older brother, Tamerlan. "I ask Allah to have mercy on me, my brother and my family."

Tsarnaev, 21, standing at the defense table and speaking in a low voice, said he was sorry but he never turned to face his victims -- whose names, faces and ages, he said, he has come to know.

"I am sorry for the lives that I've taken, for the suffering that I've caused you, for the damage that I've done. Irreparable damage," he said.

He added, "I prayed for Allah to bestow his mercy upon the deceased, those affected in the bombing and their families. Allah says in the Quran that with every hardship there is relief. I pray for your relief, for your healing, for your well-being, for your strength."

Judge George O'Toole formally imposed the death sentence on Tsarnaev -- a decision already made by a federal jury.

O'Toole recalled the evil Iago in Verdi's opera Otello, who tries to justify his malice by saying he believes in "a cruel God."

"Surely someone who believes that God smiles on and rewards the deliberate killing and maiming of innocents believes in a cruel God. That is not, it cannot be, the God of Islam. Anyone who has been led to believe otherwise has been maliciously and willfully deceived."

It was the day of final reckoning for Tsarnaev, one set aside for emotional impact statements from victims.

After the sentencing, U.S. Attorney Carmen Ortiz said she was more struck by what Tsanaev didn't say, particularly his failure to denounce terrorism and Islamic extremism.

"I regret ever wanting to hear him speak," she said.

But another survivor, Henry Borgard, 23, said he was happy with the apology and that, when he locked eyes briefly with Tsarnaev in court, he saw a boy.

"I do know that I believe in second chances," he said. "The man, the boy who planted that bomb that blew up in front of me is younger than I am," he said.

Tsarnaev is the first person to be handed a death sentence in a federal terrorism case since the September 11, 2001, attacks. He and older brother Tamerlan, who died while fleeing police, set off two bombs at the finish line of the Boston Marathon on April 15, 2013.

Two women and an 8-year-old boy were killed and more than 260 other people were injured. The blasts left 17 people -- all active, outdoorsy people -- amputees. A fourth person, an MIT police officer, was killed during the hunt for the Tsarnaevs.

The only lingering question had been whether Tsarnaev would speak Wednesday.

For most of the hearing, the families of the victims and the survivors did all the talking, leaving some jurors in attendance in tears.

"I know life is hard, but the choices that you made were despicable," said the mother of victim Krystle Campbell, Patricia, who stood with her husband, William, and her son and brother.

"You will never know why she is so desperately missed by those of us who loved her," Karen McWatters, a friend of Campbell's, told Tsarnaev, who was facing in the direction of the speakers but not directly looking at them.

Tsarnaev instead often looked down, as he did during most of his long trial.

Rebekah Gregory, who lost a leg, said she was not giving a victim impact statement.

"To do that," she said, "I would have to be someone's victim. I'm definitely not yours, or your brother's."

Tsarnaev's actions served only to bring people together, she said. Soon, people will forget him as well as his brother.

"It's so funny to me that you smirk and flip off the camera because that is what I feel we do to you every day we continue to succeed, fake limbs or not," she said, referring to the infamous image of the defendant raising his middle finger to a surveillance video in his cell.

"We are 'Boston Strong,' " she told Tsarnaev, who would not look at her. "We are America strong."

Survivor Jennifer Kauffman said her life was forever altered, but "I forgive you and your brother."

"My hope is someday soon you will be brave enough to take complete responsibility for your actions," she said.

Heather Abbott, a dancer who lost her left leg below the knee, wondered if Tsarnaev considered the stories of agonizing pain and suffering "success stories."

"I would like Dzhokhar Tsarnaev to know that he did not break me," she said.

Jennifer Rogers, sister of the slain MIT officer, Sean Collier, said, "When I'm angry I am furious, when I'm sad it is debilitating."

"I will never have a complete and happy family again," Rogers said, with her father standing at her side. "I do not know the defendant nor do I care to know him. He is a coward and a liar. ... He bought milk after setting off a bomb to kill children."

Bill Richard, father of 8-year-old bomb victim Martin Richard, said Tsarnaev could have changed his mind that April morning and "walked away with a minimal sense of humanity." But he didn't.

"He chose to do nothing to prevent all of this from happening," he said. "He chose hate. He chose destruction. This is all on him. ... We chose kindness. We chose peace."

The Richard family had urged prosecutors to drop the death penalty as a punishment option because of the anguish it will likely cause for them to go through the lengthy appeals process.

Elizabeth Bourgault, who survived the bombings, said she hopes Tsarnaev never forgets the pain he inflicted, that it haunts him for the rest of his life.

Another survivor, Jeanne-Marie Parker, said: "My only hope is that you own this grief for the rest of your natural life."

Marathon runner Meaghan Zipin said: "I'm the one who is alive, the defendant is already dead."

Another runner, Johanna Hantel, said she has come to peace with Tsarnaev. She will continue running marathons even if she has to crawl. Still, guilt consumes her.

"I feel if we had not been running this dreadful crime would not have occurred," she said. "I feel somehow as a runner this was my fault and I cannot shake this guilt."

Earlier Wednesday, a man was taken into custody outside the federal courthouse. The man drove up to the front of the courthouse, without a license plate, a Boston police source said. Police approached the vehicle, searched it and found what is believed to be a meat clever, according to the source.

Prosecutors say the Tsarnaev brothers set off their homemade bombs -- containing fireworks, BBs, nails and metal shards packed inside pressure cookers -- to become martyrs to the cause of jihad. They also sought to punish Americans for the deaths of Muslims overseas.

Tsarnaev said nothing in court during his 10-week trial. Until Wednesday, his only public words of explanation existed in a rambling "manifesto" scrawled with a pencil on the sides of the boat in which he hid for 18 hours in a Watertown, Massachusetts, backyard after a gunbattle with police. The message was punctuated by bullet holes and streaked with blood.

At the defense table during the trial, Tsarnaev fiddled with his bushy beard and tangle of curls, betraying no emotion as survivors and families of the dead told their heart-rending stories. His face was blank as horrific images of the devastation he caused filled the screens inside the courtroom.

The only flicker of emotion came when he appeared to wipe a tear from his eye while an elderly aunt, brought from Russia by the defense, dissolved into tears and gasping sobs on the witness stand.

And so, Boston was left to wonder whether Tsarnaev was proud of what he did -- or ashamed. Did he even care?

Sister Helen Prejean, a Catholic nun who has earned renown for her work with death-row inmates, testified for the defense that Tsarnaev seemed "genuinely sorry." She said he told her during one of several visits that the bombing victims didn't deserve to suffer.

"He said it emphatically," she told jurors, quoting Tsarnaev as saying, "Nobody deserves to suffer like they did."

Defense attorney Judy Clarke chose her words carefully when she spoke about whether Tsarnaev felt remorse. She stopped short of telling jurors in her closing argument that he was sorry. All she'd say was he'd shown signs of "maturity" and was on the road to someday being remorseful.

In the end, only two of the 12 jurors found any glimmer of remorse.

Tsarnaev was convicted of 30 counts, and the jury determined that six specific crimes merited the death penalty. They involved the deaths of Lingzi Lu, a 23-year-old graduate student from China, and Martin Richard, the 8-year-old boy. The two were killed by the bomb Tsarnaev set off in front of the Forum, a restaurant near the marathon finish line on Boylston Street. It literally tore them apart.

The jury did not find that he should be punished by the death penalty for the death of Campbell, who was killed by the bomb set off by his brother near Marathon Sports. And they did not condemn him to die for the shooting of Collier, the MIT police officer, a few days later. Those crimes will be punished by the only other alternative: life in prison without parole.

The U.S. Bureau of Prisons will determine where Tsarnaev serves his sentence, federal prosecutors said.

He has been held under the tight restrictions usually reserved for terrorists; they include solitary confinement and no contact with other inmates or the outside world. Most prisoners subject to those restrictions serve their time at the so-called Supermax prison in Florence, Colorado. But the federal government's death row is at the prison in Terre Haute, Indiana.

Tsarnaev's case is likely to result in years of appeals, and no one can say with any certainty when he might be executed, if ever.

He added it was difficult to predict the success of any appeal because of the secretive way in which the case was argued.

"Many of the pretrial proceedings took place under seal, and some of the sidebars were under seal," Dunham said. "We will not know until those transcripts are unsealed what other issues may be present in the case."

Only three federal death sentences have been carried out:

• Timothy McVeigh was executed in June 2001 for the 1995 bombing of the Oklahoma City federal building.

• Louis Jones, a decorated Gulf War veteran, was executed in March 2003 for the kidnapping and murder of a young female soldier in Texas.