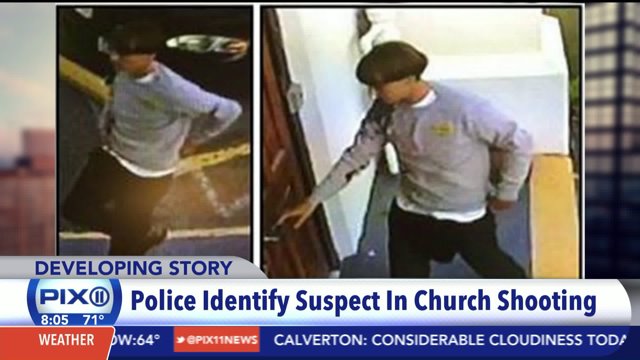 A woman who survived the Charleston, South Carolina, church shooting Wednesday night says the gunman told her he was letting her live so that she could tell people what happened there, Charleston NAACP President Dot Scott told CNN. Scott said she heard this from the woman`s family.

Dylann Roof, 21, of Lexington, South Carolina, was taken into custody without incident shortly before 11 a.m., Shelby police said in a statement. Authorities received a call about a possible sighting of the suspect. A local newspaper filled in some of the details.

Police received a tip from Debbie Dills, who reportedly spotted Roof on her way into work. She followed him for 35 miles, the Shelby Star reported.

"I had been praying for those people on my way to work," Dills told the newspaper about victims of the church shooting. "I was in the right place at the right time."

He was armed with a gun when he was arrested, according to a law enforcement official briefed on the investigation. It's not clear if it's the same firearm used in the shooting. During his first court appearance, Roof waived extradition to South Carolina, a court official said.

A senior law enforcement source told CNN the suspect's father had recently bought him a .45-caliber gun for his 21st birthday in April.

President Barack Obama mourned the violence and the victims, saying, "Any death of this sort is a tragedy. Any shooting involving multiple victims is a tragedy. There is something particularly heartbreaking about death happening in a place in which we seek solace, we seek peace."

The slayings took place inside the historic Emanuel African Methodist Episcopal Church, near the heart of Charleston's tourist district. Six women and three men were killed, including the church's politically active pastor, the Rev. Clementa Pinckney.

Wooten told reporters the victims all suffered gunshot wounds and died as a result of them.

Sylvia Johnson, a cousin of Pinckney, said she heard about what happened inside the church from survivors, according to CNN affiliate WIS.

Johnson said survivors recounted the man coming into the church, asking for Pinckney and sitting next to him during a prayer meeting for an hour. He started shooting and reloaded five times, she said.

When a man pleaded with him to stop, the shooter replied, "You rape our women, and you're taking over our country. And you have to go," she said.

A law enforcement official says witnesses told authorities the gunman stood up and said he was there "to shoot black people."

Police were searching for more information about Roof, whose last name is rhymes with "cough", and trying to determine whether he had any links to hate groups.

Authorities released a mug shot of him from Lexington County on Thursday. It was taken after a trespassing arrest in April. According to an arrest warrant from a February incident, Roof had an unlabeled pill bottle with a drug believed to be suboxone, which is used to treat opiate addiction. Roof told police a friend gave him drugs. The status of the cases is unclear.

In an image tweeted by the Berkeley County, South Carolina, government, Roof is wearing a jacket with what appear to be the flags of apartheid-era South Africa and nearby Rhodesia, a former British colony that was ruled by a white minority until it became independent in 1980 and changed its name to Zimbabwe.

Three people survived the shooting, including a woman who received a chilling message from the shooter.

"Her life was spared, and (she was) told, 'I'm not going to kill you, I'm going to spare you, so you can tell them what happened,' " Charleston NAACP President Dot Scott told CNN. She said she heard this from the victim's family members.

Federal authorities have opened a hate crime investigation into the shooting at the oldest AME church in the South, the Department of Justice said.

"The only reason someone would walk into a church and shoot people that were praying is hate," Charleston Mayor Joe Riley said.

There were 13 people inside the church when the shooting happened -- the nine people who were killed and three survivors, South Carolina state Sen. Larry Grooms, who was briefed by law enforcement, told CNN. Two of the survivors were not harmed, he said.

It was not clear if the man targeted any individual.

"We don't know if anybody was targeted other than the church itself," Charleston police Chief Greg Mullen said.

It was burned to the ground at one point but was rebuilt. Throughout its history, it overcame obstacle after obstacle -- destroyed by an earthquake, banned by the state. But its church members persevered, making it the largest African-American church in terms of seating space in Charleston today.

A call for healing

Authorities said they were shocked not only by the killings but that the violence occurred in a house of worship.

"People in prayer Wednesday evening. A ritual, a coming together, praying, worshiping God. An awful person to come in and shoot them is inexplicable," Mayor Riley said.

The killing put the nation's spotlight once again on the Charleston region. Several months ago, Walter Scott, an unarmed black man, was fatally shot in the back by a North Charleston police officer, a killing that was captured on video.

Pinckney backed a bill to make body cameras mandatory for all police officers in South Carolina.

"Body cameras help to record what happens. It may not be the golden ticket, the golden egg, the end-all-fix-all, but it helps to paint a picture of what happens during a police stop," Pinckney said in April.

Riley, who's seen Charleston go through ups and downs during his 40 years as mayor, said the city must immediately start the healing process. A community prayer meeting will be held Friday at the College of Charleston, not far from the church, he said.

'Sick to our stomachs'

The church sits in an area of Charleston densely packed with houses of worship and well-preserved old buildings. The streets of the neighborhood are normally filled with tourists.

Charleston, as several church leaders pointed out, is known as the "Holy City" because of its numerous churches and tolerant attitude toward different denominations.

"Like everybody out here, we're sick to our stomachs that this could happen in a church," said Rep. Dave Mack, a friend of the church's pastor.

They called for justice, but also for calm. Theirs is a strong community, they said, and this incident wouldn't tear them apart.

The president of the NAACP expressed his outrage over the shooting.

"There is no greater coward than a criminal who enters a house of God and slaughters innocent people engaged in the study of scripture," Cornell William Brooks said.