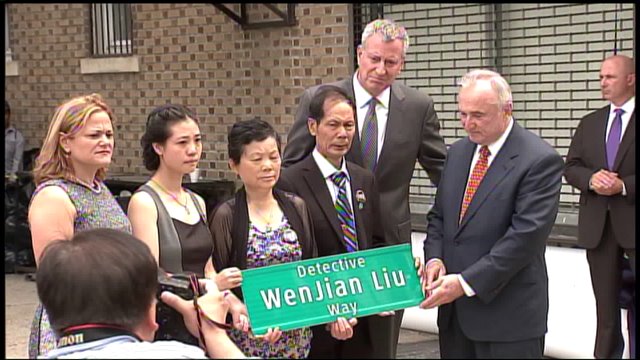 Hero Detective Wenjian Liu was honored Saturday in an emotional street naming ceremony attended by his family, friends and dozens of police officers.

“It’s powerful to be remembered in the place that was yours, and this was Detective Liu’s place,” said Mayor de Blasio.  “This was where he first experienced New York City and the United States of America.  This is where the American Dream came true for him.”

The dream for the Chinese immigrant was to become a member of the NYPD.  Liu, who came to this country when he was 12-years-old, found his home in the 84th precinct, and patrolled its neighborhoods.

Last December, he and his partner, Detective Rafael Ramos, were shot to death by a lone gunman, as they sat in their patrol car outside the Tomkins Houses in the Bedford Stuyvesant section.

Liu’s grieving widow Pei Xia Chen thanked the NYPD for all its support, and praised the department for its efforts in keeping New Yorkers safe.

“Our law enforcement officers sacrifice their lives day in and day out, in serving and protecting this great city.  This city is our home,” said Pei Xia Chen.

The new sign is close to the house Liu bought for his parents.

“I think you’re well aware of the Chinese custom of children taking care of their parents.  Wenjian Liu was all about that,” said Police Commissioner Bratton.

The widow and children of Detective Ramos attended the tribute to Detective Liu.   Next Saturday, Detective Rafael Ramos Way will be unveiled.