Safest big city in America? How the nickname can co-exist with the spike in crime 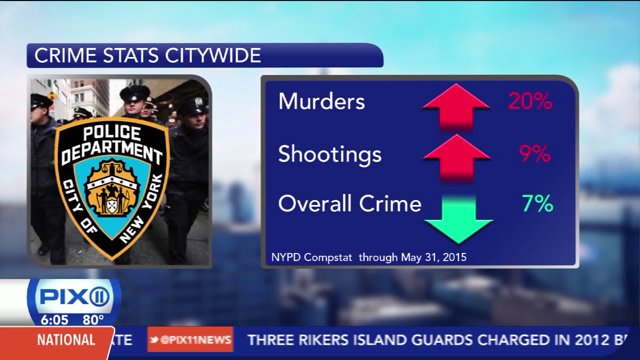 New York is the safest big city in America. At least, that`s how Mayor Bill de Blasio and his two predecessors have said. At the same time, New York has seen a spike in murders and shootings.

NEW YORK CITY, N.Y. -- New York is the safest big city in America. At least, that's what Mayor Bill de Blasio and his two predecessors have said. At the same time, New York has seen a spike in murders and shootings. The contrasts are side by side, prompting an assessment  of the situation, among crime statistic experts and residents of some of the city's highest crime neighborhoods, that's very different from that of the city's chief executives.

The "safest city" moniker is said both at City Hall and at Police Headquarters. At the latter location, though, the hyperbole is tempered by comments like one made by a deputy commissioner at a recent news conference at One Police Plaza.

"The level of homicides committed is substantially higher" this year so far, compared to last year. "Is that indicative of more guns on the street?" he asked.  "That's something we're looking at."

The comments were made as the result of the latest NYPD crime statistics, called CompStat. They showed that citywide murders are up 20 percent from the same period last year, and it's the second year in a row with such an increase. Also up are shootings, by 9 percent.

Still, thanks to decreases in such violent crimes as robbery, assault, burglary and other areas, overall crime is down about 7 percent. That's a citywide average, however, meaning that in some parts of the city, crime is worse than in other neighborhoods.

"Even in the daytime, a lot of crazy things are happening," said Alexa Gonzalez, an Upper West Side resident who works in the South Bronx.

The NYPD top brass agrees. They released a surveillance video June 1 of a man who popped off a dozen shots with a semiautomatic in broad daylight in Brooklyn a week and a half ago. Police are still looking for him.

She spoke with PIX11 News while waiting for the bus a few paces away from NYPD's 40th Precinct, where murders are up 100 percent from a year ago. However, shootings are down 54 percent, and so is overall crime, barely.  It's down less than 1 percent.

Some residents, like Joshua Carrero, responded to the South Bronx numbers with a challenge to the city.

The word from experts to the mayor who touts the "safest big city" slogan is slightly different, but nonetheless admonishing.

Silverman literally wrote the book, with fellow John Jay College professor John Eterno, on crime statistics. It points out that the FBI, which compiles crime numbers of all U.S. cities, cautions "against drawing conclusions by making direct comparisons between cities."

But that doesn't mean New York is more dangerous than Los Angeles or Houston or Chicago or Baltimore, which have all seen rises in violent crime recently.

Quite the contrary, said Silverman.

Even on Alexander Avenue in the South Bronx, where PIX11 encountered a couple of dozen volunteers from the hedge fund The Blackstone Group heading past the 40th Precinct to do painting and gardening tasks, residents like Taikeyma Dawson, who was still waiting for that bus with her 9-year-old daughter, admitted, "It's a little better" as far as crime fighting goes, "but it could be better."