Students left in limbo for graduation after grade fixing scandal 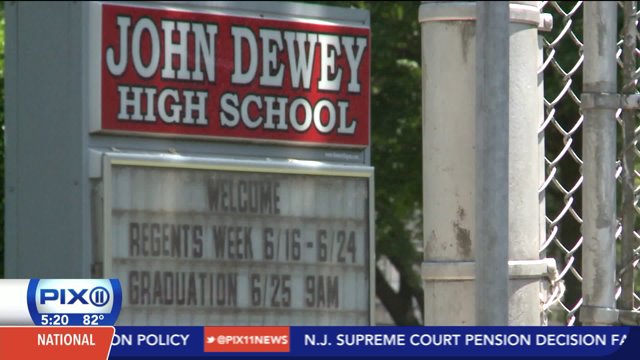 With graduation just weeks away, some students at a Brooklyn high school aren`t sure if they`ll be walking yet.

GRAVESEND, Brooklyn — For more than a year the Department of Education has been investigating whether administrators at John Dewey High School fixed grades to improve graduation rates.

Nearly 16 months later the DOE says that investigation is still ongoing and just weeks before graduation, some students diplomas could be in doubt.

"I'm actually really behind on my credits, I need to catch up and they thought it was a good idea for me to be in that class," senior Angel Pachecho told us back in March.

Pachecho was just one of the students who told us he was a part of the credit recovery program at the school in Gravesend, Brooklyn.

The class became known as "easy pass" among many of the students.

Some even claimed that the kids were able to watch movies like "Jurassic Park" for science credit.

Under the cover of anonymity, one teacher told us the the administration pushed through hundreds of students over several years to boost graduation stats.

"Students who did no work, who never attended were pushed through," said the teacher. "Students that I failed had their grades changed without my permission."

With graduation just about two weeks away, the DOE says it's still investigating the claims which could impact whether or not several students get their diplomas.

"The investigation is nearing completion," a spokesperson told us in a statement. "While we cannot discuss its findings today, if there are substantiated claims of grade fixing that affect credits students need to graduate, we will require those students to secure those credits and they would not graduate on time."

"Well I think it's very unfair that a few teachers who are unhappy with the administration are bringing the whole school down," said Rossitza D'Agati who has taught at the school for almost two decades.

While she says the school has gone through its academic ups and downs, she says the current administration has the students back on the right track.

"In the last three years I've noticed how things are changing in the positive direction," said D'Agati.

So when I asked her whether or not she was worried the ongoing investigation would impact her students come graduation day, she told me: "I don't have any concern whatsoever."

Since this investigation spans multiple school years, we asked the Department of Education what it could mean for previous students if some of these claims are substantiated.  On that topic, they had no comment.