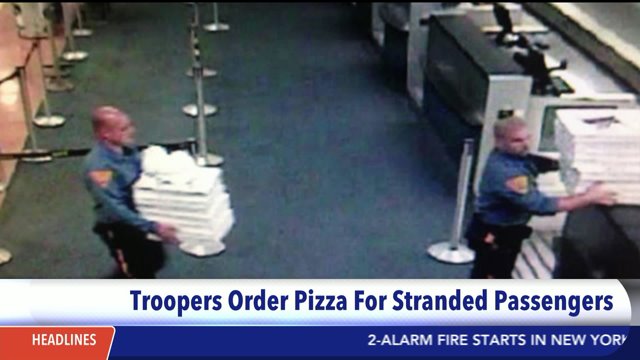 Two New Jersey State Police troopers are being hailed as heroes for some stranded passengers.

Troopers Mark Adotta and Joe Mercurio personally paid for the pies on Sunday night for 100 helpless travelers at Atlantic City International Airport. The passengers were stranded in the airport, which was all but shut down for the night, after a Spirit Airlines flight was canceled, leaving them with no food or transportation.A Facebook account with the name Samantha N Steve Baugh wrote about the ordeal and complained that all the customers got from Spirit was 'a cookie.'

Meanwhile, Adotta and Mercurio stepped up. Without hesitation, the two gentleman ordered and paid for 15 pizzas to feed the stranded Spirit Airline passengers. Neither of the troopers wanted to be recognized for their generosity.

A state police official confirmed the Facebook user's version of events to USA Today, reiterating that the troopers did not want to be recognized for their good deed.