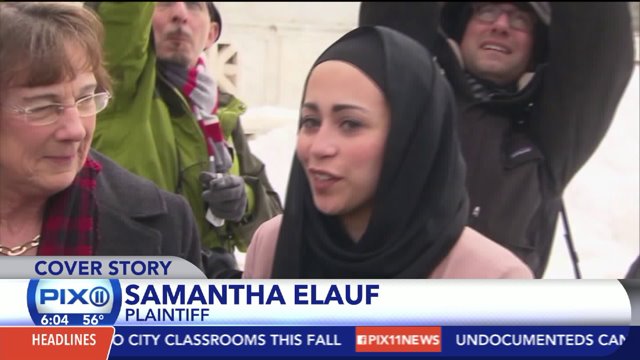 BAY RIDGE, Brooklyn (PIX11) -- The U.S. Supreme Court on Monday ruled that citizens cannot be discriminated against because of religious garb. The decision, of course, applies throughout the country. The extent of its need to be emphasized in New York, however, some people may find remarkable.

Samantha Elauf, 24, was the plaintiff in the case against Abercrombie & Fitch. The fashion company had refused to hire Elauf seven years ago because she wears a hijab, a headscarf traditionally worn in public by many observant Muslim women.

The court, in an opinion written by Justice Antonin Scalia, ruled that nobody can prevent Elauf, or anyone who wears religious garb, from getting a job for which they're qualified.

In Elauf's case specifically, she wasn't hired even though the report after her Abercrombie interview gave her highest marks in the company's three most important areas for sales staff, which the company calls "actors": being outgoing and promoting diversity, sophistication and aspiration, appearance and sense of style. That was in Tulsa, Oklahoma, in the previous decade.

New York, on the other hand, is the country's most religiously and ethnically diverse city, and in its most densely populated Arab neighborhood, the north end of Bay Ridge, Brooklyn, there was an incident this past weekend that demonstrates the need for greater appreciation of diversity.

At the Fifth Avenue Festival, a street fair, "One of our constituents... was walking down the street," said Aber Kawaz, a spokesperson for the Arab American Association of New York, or AAANY, "and kind of bumped into a lady, and this lady kind of went off on her, yelled at her and told her, 'You don't belong here. Get out of this country,' and it's just one of many racist incidents."

That's why her organization is part of a nationwide campaign called Take On Hate that uses humor, and outreach, like school presentations, and subway posters to try and fight discrimination.

Kawas specifically is AAANY's senior youth leader. In her position, and as a woman who wears hijab herself, Kawas knows firsthand all kinds of discrimination against people for religious and ethnic reasons. She told PIX11 News that the discrimination ranges from outright offenses to day-to-day microaggressions.

"Just walking through the streets and getting looks," Kawas told PIX11 News, "or going through security checkpoints. I don't know why every time in the airport I always have to get [patted] down."

Air travel proved to be prominently problematic in the past few days for another woman wearing hijab. Tahera Ahmad is a chaplain at Northwestern University, who was on a flight from Chicago to Washington on Friday. She ended up posting on Facebook how a United Airlines flight attendant would not serve her an unopened can of Diet Coke, as she'd requested. When she'd asked for an explanation, Ahmad said she was told that it was because she "may try to use it as a weapon."

When she complained, another passenger, according to Ahmad, told her, "You Moslem, you need to shut the f*** up."

The account led to calls for a boycott of United Airlines, which is investigating and whose pilot and flight attendant apologized to Ahmad.