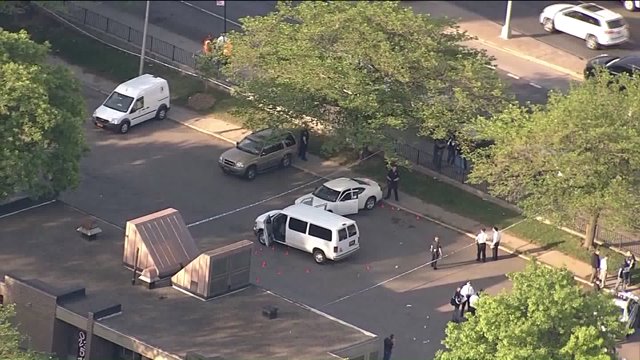 A man was killed by police near Stanley and Pennsylvania avenues in Brooklyn the morning of May 26, 2015. 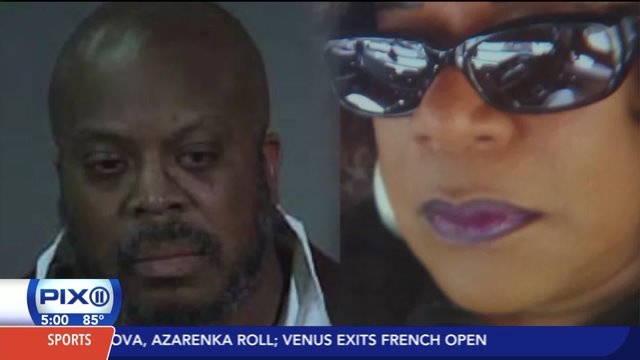 EAST NEW YORK, Brooklyn (PIX11) -- A man suspected of gunning down his ex-girlfriend outside a Queens casino was killed Tuesday by plainclothes police officers who tracked him down less than four hours later to a school parking lot in Brooklyn, authorities said.

Investigators said the deadly chain of events began about 2:20 a.m. outside Resorts World Casino, located at 110-00 Rockaway Blvd. in Queens. It was there that the now-deceased gunman -- Dalton Branch, 51, of Brooklyn -- opened fire on his ex-girlfriend Patricia Mohammed, 55, of Brooklyn, police said.

Branch allegedly pulled up alongside Mohammed who was with a co-worker in the parking lot of the casino, police said. He started shooting at the car, killing Mohammed and injuring her co-worker.

Police recovered this .380-caliber semi-automatic handgun May 26, 2015, from the parking lot of a Brooklyn school where they shot and killed a man suspected of fatally shooting his ex-girlfriend at a Queens casino just hours before. (Photo: NYPD)

After he mortally wounded Mohammed, Branch allegedly sent menacing text messages to the victim's family and the man she was with calling himself "the Grim Reaper," Boyce said.

PIX11 News spoke with Mohammed's aunt who said she told her niece that Branch was trouble. The couple broke up a year ago but Branch would not leave her alone.

"You gotta be careful with that guy," the victim's aunt Rosemarie Guilford said. "He's a guy who likes guns and all this stuff and you should be away from him."

Shortly before 6 a.m., three plainclothes officers traveling in a white unmarked van found a car similar to Branch's in the parking lot of P.S. 4, located near Pennsylvania and Stanley avenues, police said.

When they drove up to the white car, Branch pulled out a gun and started shooting, police said. The officers returned fire, killing him.

The three officers involved in the shooting were taken to a hospital to be treated for tinnitus, a ringing in the ears, police said.

Aerial footage of the scene in Brooklyn showed dozens of evidence markers and several shell casings littering the pavement near a bullet-riddled white sedan and a white van with its drivers' side door open.

A .380-caliber semi-automatic firearm (pictured above), an extra magazine clip and an empty box of ammunition were found at the scene, Boyce said.

Though it happened near a school, the shooting did not appear to disrupt operations at P.S. 4. A woman who answered the phone at the school said classes will be in session Tuesday. Students arrived at their usual time of 8:10 a.m.