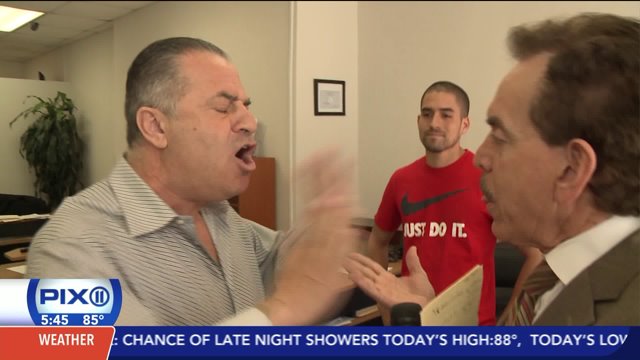 ASTORIA, Queens (PIX11) -- “I’m calling the police right now. I’m calling the police. You have no right to be here,” said Phivos Ioannou. He ordered PIX11 to leave his office at Astoria First Realty where we’d come after getting a complaint  from Erica Rosen and her fiancé, Marine vet Miguel Rodriguez.

The couple had seen a listing online for a two-bedroom apartment for $2,500 a month.  They met with Dino Ioannou, Phiovos’ son, who showed them the apartment.  They loved it and gave Dino a $5,000  cash deposit for security and broker’s fee.  The couple says Dino told them “the apartment was ours.”

But when they didn’t hear from Dino for a week, Erica Rosen says “we got in contact with the owner of the building and the owner said he never knew anything about us, and the apartment was never ours and he has five other applicants for it. He said he wants nothing else to do with us.”  Miguel says “at that point we asked for our money back and Dino never wanted to give us our money back.”

That’s when the couple called PIX11 Investigates and we went to Astoria First Realty. Dino was not there, but I spoke with Phivos, who recently served time in federal prison for identity theft and was stripped of his real estate license. Phivos  denied any knowledge of Miguel and Erica’s apartment deal. He said “I had nothing to do with these people. I don’t even know these people.”

But the couple said they’d spoken with Phivos on the phone many times and played one conversation they recorded.  Phivos said: “Do you still want the apartment?” Miguel answers: “Well yes I do want the apartment but I cannot deal with Dino anymore.”  Phivos replies “No, you’re gonna deal with me from now on. I’m gonna try and see if I can get you the apartment.”

When I tried questioning Phivos about that recorded conversation, he said “you’re gonna get a lawsuit from my lawyer because you’re chasing me.  I don’t have to answer any questions from you.”

A number of complaints on Yelp refer to Astoria First Realty as “dishonest scammers,”  “like used car salesmen," “they are baiting and switching”. Erica and Miguel filed a police report and after PIX11 got involved, and Phivos promised them a full refund.

And we were there the following day when the couple met with Phivos and Dino and came out with the $5,000 cash in hand.