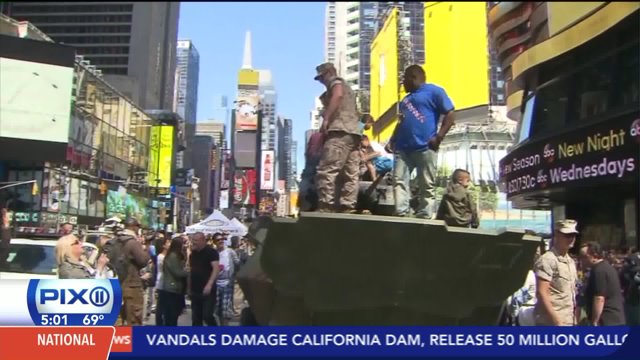 New Yorkers honored members of the armed forces for the 2015 annual Fleet Week in Times Square.

Nearly 1,800 sailors, Marines and Coast Guard men and women are participating in Fleet Week New York, now in its 27th year, and for some in the military, it's their first time in the Big Apple.

"I love New York and all the people thanking us for our service," Daniel Cuevas, PFC Marine, told PIX11.

In the heart of Time Square the servicemen and women are showing New Yorkers and tourists some of their military equipment including what it it's like to be behind the wheel or climbing on top of a Humvee.

This light armored vehicle 25 is amphibious and can go 12 km an hour in the water and 62 mph on land.

"It's a way to open the eyes of the public to what we do," Lance Corporal Joseph Owen, U.S. Marine, told PIX11 as he posed for pictures with tourists and New Yorkers atop the LAV25.

And for some it was the first time to shake hands with a female Marine and thank her for her service as well.

That's what Ellen Olesen, visiting the city from Florida, did.

"It is great to be in New York and have people thank is so much," Corporal Krista James, U.S.Marine said.